I’ve been using the Samsung Galaxy S3 for three days now. I don’t think you can sensibly rush out a review within hours of getting your hands on a device particularly as these phones are not simple gadgets anymore. They are highly complex and despite any focus on usability and simplicity there is so much to learn and find out about them that it inevitably takes time.

My first concern was somewhat mundane – the size of the phone. The Galaxy S2 was just about ok for me  – I struggled to read the top of the screen with my thumb and was worried that the S3 might be significantly bigger and thus harder to reach. This aint the case. Although the S3 is advertised as being bigger it isn’t that much different in real life, which is good. I also sat it next to a Samsung Note and it isn’t much smaller than that either but a lot more usable as a phone. I suspect we are getting the best of both worlds here.

The  Samsung Galaxy S3 is otherwise known as the GT-I9300. I know that this is the underlying model number of the phone because whilst trying to name it something to hook up with my Parrot car kit it automatically connected itself. It was easy. All I had to do was enter the car kit pin number.

I couldn’t, in my desire to get going on a Friday evening, find out how to name the phone. It must have been me because when I discussed this with one of the kids the next morning it took him seconds to find out how to do it. I wanted to call the phone “Rosita the Dragon Slayer”. The kids thought that was daft. I like picking different names for my phones. The Galaxy S2 was called Ernest and before that I had a Roland.  There’s a prize for anyone who guesses what we ended up calling the S3.

The transfer from S2 to S3 was simple. Google stores logon data for a number of resources and all I had to do was log on to my Google account. My directory also transferred without a hitch. It has taken me a while over the weekend to explore some of the features and I’m not sure I have all the headliners working.

For example the phone still goes to sleep when I’m looking at the screen so the much heralded keep alive as long as you are looking at the phone feature seems a bit hit and miss at best. I can see an eye looking at me so it is trying to do something but not working yet.

Tap to go to the top of the email list works fine though I’m not sure how much I’ll use it. I guess I didn’t do much emailing over the weekend.

I do like the way you can customise the “locked screen” display. 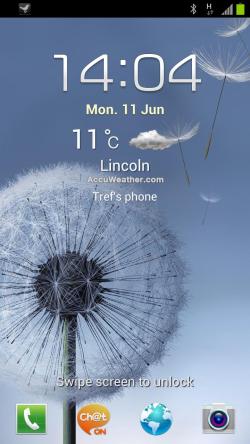 I have the weather, time and my name as owner of the phone on show. If I leave it somewhere around the office as I am often wont to do people will be able to see it is mine and bring it back.

The biggest decision I now have with the locked screen is whether to implement any security features. With the S2 I have a pin code. This seems sensible. Trouble is that this doesn’t allow for rapid deployment if, for example you want to take a photo.

The Galaxy S3 has shortcuts on the locked screen. To unlock the screen you just swipe it. However you can also swipe one of four (programmable) shortcuts and open that application. V handy if you want to take a photo quickly. You can also tap and hold the screen and rotate the phone to do this. Uber cool if you ask me.

The point is these features get you up and running very quickly and they don’t work if you have security measures in place. The time it takes to enter a password or pin number often means a photo opportunity has passed. 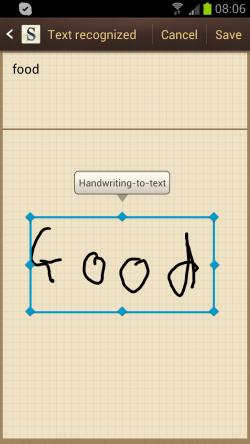 This may be a red herring. At a barbecue yesterday the WW2 Lancaster bomber from the Battle of Britain Memorial Flight flew over the house – we do things in style in Lincoln. I scrambled to get my phone out of my pocket but wasn’t fast enough to get a decent photo, and that was without the pin number enabled.  I will almost certainly end up with a pin to unlock the phone.

There are some cool features I really like. Swiping the side of your hand across the screen takes a screen shot. I use it and indeed some of the pics in this post were taken in this way.  S Memo is also great. I often find myself wanting to make quick notes on the hoof and the only practical way of doing it has been by using the voice recorder.

S Memo allows me to capture handwritten notes on the screen and provides a text recognition capability. This works even though after 20 odd years of keyboard use my handwriting is totally rubbish. The example inset shows the word food. I actually wrote Good but looking at the handwritten version I can understand the mistake.

Security is a very interesting and notable enhancement 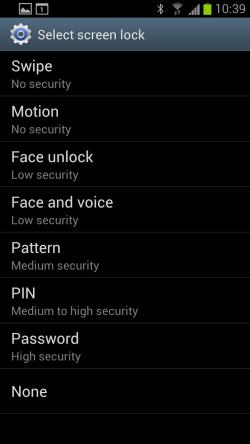 on the Galaxy S3. I’ve mentioned the fact that you can include a password. Nothing new there. However you now have the option to encrypt the data on your device or its SD card. It says you need at least an hour to do this and you have to have your phone plugged in to a charger. This has put me off initially but I think I will have a play at some stage. It seems the sensible thing to do.

I can also remotely control my phone using “SamsungDive”. This isn’t a feature unique to Samsung I’m sure but it’s the first time I’ve used it and I really like it. The screenshot from the SamsungDive website shows that you can lock, track, ring, wipe out, unlock the screen and forward calls.

This is all very useful. It could be a really good business application to solve the BYOD problem if Samsung could create an administrator control panel. Some of the security features need great care in their application. I can use a combination of face and voice recognition. It worries me that I might set this up only to find that it doesn’t recognise me downstream and locks me out permanently.

I’ve also been playing with the voice recognition. It can work well for some things – “call home” or “text wife” for example. The screenshot inset shows me asking for the weather in Newark which it had no problem with (it seemed to reflect what I could see from my office window). I haven’t got the voice activated wake up commands working yet 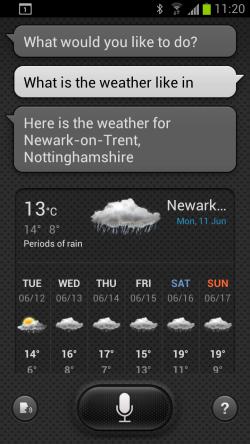 and some of the voice recognition requests have left it not knowing what to do (except perhaps offer the option to consult the www) but this technology is clearly improving with every new device.

Finally, for now at least because I haven’t got all the advertised features working yet, there is the camera. There are some built in features that are big improvements over the Galaxy S2. They might be Ice Cream Sandwich versus Gingerbread changes but they definitely make the S3 better.

Changes include “Panorama” shots. I ignored this to begin with because I just thought it was all about long distant photos for scenery. In fact it’s all about being able to take 360 degrees shots. I had to use a third party app for this on the S2 and it didn’t work particularly well.

Then we have “burst” mode. This is a game changer. It allows you to take 20 shots at a rate of 3 shots per second. What’s more you can now turn off the clicking sound on the S3 so you can do this in silence – you can’t turn the shutter sound off on the S2. You might ask why I’d want to take photos in secret but it is sometimes the only way I can get natural photos of the kids – they either don’t like having their photos taken or want to do stupid poses.

In burst more it is actually quite cool to have the shutter sound on because everyone can hear that the camera is taking lots of shots. I did a bit of experimentation with this over the weekend with generally good results. If a subject is moving however the camera doesn’t necessarily refocus that well so quite a few of the shots came out blurred. Not all though.

The biggest problem is the volume of photos you can now take very quickly. I used up 937MB of memory taking 596 photos over the weekend. At 3 a second that’s just over 3 minutes worth of photography to use around a GB of storage!! Hells teeth!!! A HD video shot uses 300MB for 5 minutes.

So this morning my hard drive has 1GB more stuff on it. It took me a while to get the photos transferred – seems I used so much memory that the PC couldn’t see the photos on the phone itself somehow. I should delete most of the photos – the S3 does provide you with an option to select the best shot out of the burst. My take is that I can’t tell from the phone which is the best shot and so I need to load it onto the laptop to see. Once on the laptop it’s easier to just leave the folder untouched. After all what’s a Gig? It’ll soon add up!

If you’re asking me whether the S3 is better than the S2 then the answer is yes. If you are asking whether you should ditch the S2 before your contract is up then you need to decide on the value to you of having the latest phone. The S2 is still a great phone in its own right. I can’t put a price on the difference between S2 and S3. The S3 must be rated the best phone on the market (OK I’ve not tried them all) so if that’s what floats your boat then you need to change.

I’ll put down some more words as I get to grips with some of the features – particularly the voice activation. In the meantime don’t forget the competition – what name did we give my Samsung Galaxy S3?

I had a peep at this phone the other week whilst out and about. Before this came out i was set on the HTC – One X. Now i am not sure. All things aside they almost the same spec (from what i read) – the only thing i can find is HTC has a better casing. Certainly the S3 looks more pleasing with the pebble shape. I will let you play with yours a while then make the choice – thanks for the review!

Wow – that’s a lot of photos/data…! (Especially when you think about backing it all up etc.)

That’s very nice of you to say HmmmUK 🙂

Have you called it Tref’s Phone.. just a guess 🙂 Waiting for the Blue to come out still. I cannot deal with white phones. It will replace one of my Galaxy Nexus so looking forward to it.

Raymond – nope wrong though seeing as you are the only entrant so far you may yet win the prize by default for being the only person to have bothered.

Hi Tref, my guess is Caspar 🙂