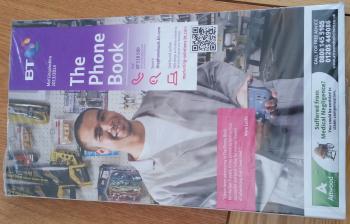 Presumably the QR code links to a list of smartphone apps to replace the paper slab, along with some handy recycling instructions for it.

I was considering suing BT after I too recently discovered not one but two of these literature works carefully left lying on my doorstep as I walked out one morning. I realised after damn nearly breaking my neck over them that my criticism of BT Group over the years might have been the reason said delivery person hadn’t raised my awareness to them. Likewise I too was amazed they still did them.

Gary,
Your comment re the National Gallery has prompted me to include a link to my book launch party page http://www.philosopherontap.com/book1/ . I’m a bit of a tart, me.