Goodness gracious me it’s the 12th of April already. We are nearly a third of the way through the year #wosthatallabout? Fortunately the worst bit is over, weatherwise, supposedly. Those that have survived the winter are clearing out their nests in anticipation of a new season of renewal and growth etc etc etc.

Today I have a bunch of conference calls and am working from my home office. Looking out onto my back garden the birds are gathering new nesting materials. Nice.

I just popped down to the station to pick up a bunch of train tickets bought in advance to get the best deal (coz I’m tight) and noticed something eerie on my phone. Google Now not only told me the weather at Lincoln train station but also at Schipol Airport and in Hamburg. 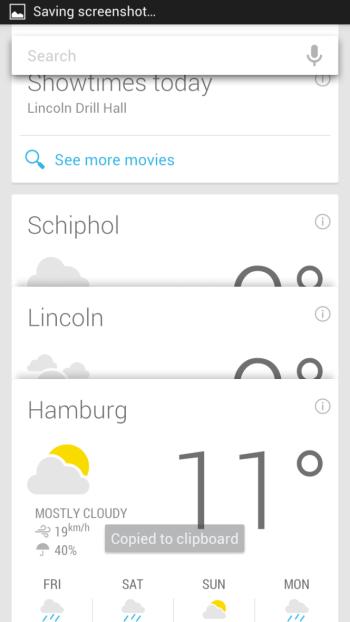 I can already hear the “so what”s and the “get to the point”s. The fact is I am traveling to Hamburg tomorrow via Amsterdam Schipol for the 22nd Euro IX Forum. It’s in my calendar. Google Now saw this and told me what it thought I wanted to know.

Well it is absolutely right. I did want to know the weather at my destination because I have been wondering what to wear. Those who know me will realise that this is somewhat unusual for me but we have been suffering from “brass monkeys” weather and how am I to know that it isn’t just the retribution of a merciless god on a heathen population. The same powerful being might have had a different attitude towards the Germans who have been very generously propping up the Euro for a substantial chunk of mainland Europe, as well as the occasional paradise isle. No point in me turning up in Germany in my thermals if shorts would be more suitable.

As it happens it looks like the weather is going to be the same in Hamburg as it is in Lincoln Station so the Germans must also have done something wrong. Hah!

It’s pretty cool. At this point in time I’m not worrying about the fact that it knows quite a bit about me though that is something I will have to keep an eye on. The fact that I can switch Google Now off doesn’t make much difference here because probably all that is doing is switching off the display mechanism and not the actual gathering of the data itself. I dunno.

Anyway I’ll keep you posted on my progress in Hamburg. Look out for a post on the world’s biggest model railway. Oh and there’s Euro-IX of course. A gathering of the world’s finest internet exchanges which I will be attending as a director of LONAP. I will report back.

Yesterday I looked up a post code on Google Maps on my laptop. My phone is now telling me how long it’ll take to drive there. This could get quite creepy.

I’m the same, the google products concern me just because of how much data they do collect. Though isn’t there a feature where you can tell it you don’t want it to track your data?

I’m sure you can tell it not to track your stuff. However I doubt that most people do it. It’s also a dual edged sword. Half of me says I want Google Now to tell me what the weather’s going to be like and how long it is going to take me to drive home. The other half of me doesn’t. I dunno the answer.