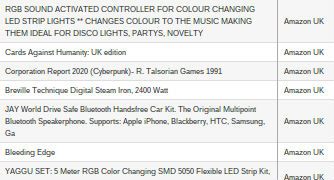 Thanks Tref – all interesting stuff 🙂

It might be worth checking the T&Cs with SkimLinks – some of these schemes (i.e.AdSense) don’t allow you to share earnings specifics and will chuck you out!

A shame as that would take the interest out of your post!

My little play site has been a great exercise for me.
I started it a few years back as a bit of fun against my sister who was launching her own ‘monetized’ website and it has proved (much to my surprise) to have been quite popular 🙂
It’s had better times, but it’s still approaching 5 million (total) page views.

I’ve gone from 180,000 page views pm down to around 45,000. It’s really creaking but I haven’t wanted to touch things while it’s still working for me.
A complete re-write is (over)due when I’ve time and your blog is helping to motivate me 🙂

Thanks for the tip – couldn’t immediately find their T’s & Cs to will just leave it methinks & see what happens.

I wonder if you would be better going direct with Amazon’s Affiliate scheme, instead of through a third party, who must be taking a portion what may be available directly to you…

Also, I think Amazon (and a lot of these affiliate schemes) use a cookie that’s often valid for 30 days, so once they had clicked on your link, anything they bought over the next 30-or-whatever days would count, which may well have covered the Christmas purchasing period, so you may find sales drop off until the same period later this year…

FWIW The Amazon ‘Associate’ cookie expires in 24 hours – but normally much quicker as the visitor needs to keep the session open:

I would think that for a lot of this stuff sales are reasonably instantaneous. For things like broadband connections people probably take a bit more time to shop around before finally deciding.