Probably spent more time on the Gigaset stand than any other. Party because I kept bumping into people I know there and partly because they had a couple of great products being demo’d.

The first video is a demo of an Android DECT VoIP phone. It’s basically a tablet mounted on hardware that turns it into an useable telephony device with a DECT handset on the side. There is a wired version available. 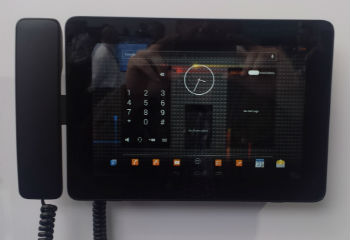 The phone costs £500 but you have to consider this in relation to the cost of a high end business phone together with the functionality on offer. You can use all the normal Android functions together with a PBX or a hosted VoIP service.

You could even mount it on a wall for use around the house.  Consumers might not want to pay £500  for a phone kitchen phone but it is effectively also a TV that you could mount on the end of a cupboard or the side of the fridge.

The video was taken on a Samsung Galaxy S4 at the connected business show but it is surprisingly watchable despite all the background noise that comes with such an environment.  Thanks to Keith Jackson for the demo. Should be sampling in the next month so look out for a more detailed review.

There’s more to this post below the first vid so read on (MacDuff).

Next up the “all new Gigaset R630 handset” with full support for IP65 (whatever that is – some kind of environmental spec, could look it up I suppose).

Ever dropped your phone into a bucket of water by accident? Of course you have. We’ve all done it. Only last summer my Droid slipped out of my top pocket into the bucket of water that was the beer fridge at a barbecue.

Well now you can bend over that bucket of water with confidence with the all new Gigaset R630 handset. The demo says it all. Thanks to James Linton for the entertainment.

IP Rating (Ingress Protection Rating – not to be confused with Internet Protocol!) IP65 is the rating which states “Protected against powerful water jets; Water projected from a nozzle against the enclosure from any direction shall have no harmful effect”. See http://www.wikipedia.org/wiki/IP_Code#Liquid_ingress_protection

Thanks Tref for your fab review of our latest products injected of course with your usual humorous take as ever!

Thanks for the useful detail James – you never know when it will come in handy for a pub quiz. Oh and yes I have dropped it into other water receptacles as you describe – fortunately post flush 🙂