Went along with Dan Winfield of Voxhub to Connected Business – the show formerly known as UC Expo. UC is so yesterday isn’t it? Trouble is all they have done is change the name. The content was much the same as ever. Things don’t move particularly quickly in the connected business game (there were a few interesting toys which I will expound on in a later post).

I suspect what will happen is that one day we will look up and the whole world will have changed. A gradual process that we will only be able to observe when looking back, or browsing through an internet archive somewhere (if you have time to do that kind of thing – loser).

Getting the important things out of the way first below is a picture of me and Dan with “the girls”. A cracking pair of young ladies. I don’t think they could speak English but we weren’t paying them for their conversational abilities1. They latched on to us as soon as they saw us coming…

Walking around the show it was noticeable that everyone had dropped the phrase Unified Communications from their stand designs. Sheep the lot of em. Although UC is a bit of a bland phrase I can’t really think of a better one and I’m keeping it as a category for the moment on the blog.

I didn’t look very hard but I could only find one stand that mentioned UC and that was Logitech. Not totally sure whether their UC was actually short for Unified Communications or something else but it matters not really.

We did find a nice looking screen from Bluejeans/Intercall that combined as a video conference end point and whiteboard. Photo of me below having a play. My scribblings appeared on another screen the opposite end of the show which I hadn’t realised until I spoke to someone I know on another stand a short while later.

There were only a couple of issues here. One is that the screen cost fourteen grand (pounds sterling) and the other was that it was designed to fit into the Microsoft Lync ecosystem. The £14k might be comparable to in room video conference systems (for all I know) but the fact that it only supported Lync made me  instantly lose interest. Truth be told I wasn’t thinking of spending that kind of dosh anyway. My £200 Chromebook does me fine.

That’s all you get in this post. Next up android deskphones and waterproof phones. 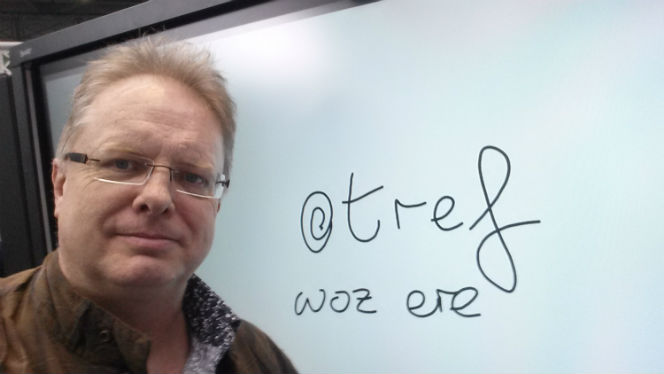 1 for the avoidance of doubt and in case my wife reads this we weren’t paying them for anything.