Late one Saturday afternoon in the spring of 2009 I lived out a fantasy, one that I know is shared in one form or another by just about anyone who has ever sat down in front of a computer keyboard. On that unforgettable day I placed a Dell laptop computer that had caused me no small amount of angst, frustration and tsuris (Yiddish word…look it up) under the back left wheel of the car I was driving and repeatedly ran over it until it could be repurposed as a post-modern art installation piece entitled “Android Roadkill”.

On that glorious sunny day I recall for a scant second trying to imagine putting AppleKory under-wheel in the same manner, and I think I actually shuddered at the thought. I simply could not fathom laying any harm to my beloved MacBook, the first computer with which I had ever felt a sense of affection. To borrow scandalously from “Jerry Macguire”, AppleKory completed me. I had her set up in a way that reflected who I am, the way I work and play, the things I like, my interests, my hobbies, my compulsions, my obsessions, and she made my fingers tingle when I ran them over her chassis. Everything on my AppleKory had to be smart, sharp, efficient, clean, and…perfect.

For my math-challenged readers, 2009 was five years ago. A lot can change in five years. 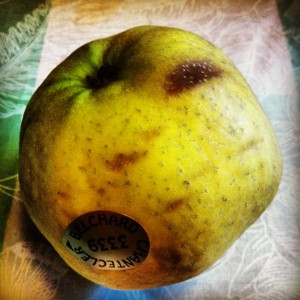 Two complete system replacements later (as well as a component upgrade on my current AppleKory that for all intents and purposes should be considered a full system replacement), I still get my MacBook with great tenderness whenever I go to to backpack her. Today, however, that is more due to care and concern for my cyber-life than any lingering finger tingle. Not that I would describe her as delicate or fragile. No, from a hardware perspective this AppleKory — my third, a 2011-issue MacBook Pro 13″ — is as sturdy a piece of computer hardware as any I can imagine. I find it fortunate, though, that she spends the vast majority of her time in her now time-worn position at the left of my keyboard and not on the move, because these days from a functionality perspective that ol’ Apple “solid” feel is a growing-more-distant memory.

That Apple “solid” feel. I think more than anything else it is what drew me to make the move back to Apple in 2008, and also what kept me there. And I am not just referring to the build quality (though, that too, yes, yes), but a computer you could actually close the lid on and put into a bag, and then take out of a bag and lift the lid on (lather, rinse, repeat) repeatedly without worrying for a moment about…well, about anything. She’d go to sleep, she would jump straight back out of sleep rarin’ to go, and do it all over and over again (lather, rinse, repeat). WiFi up, connections restored, software still in RAM and ready to resume function. Every time. Every. Time.

At one point not all that long ago I thought that Apple was amiss in not using the following dead-effective — and truthful — advertising slogan to sell their computers: “Apple. It just works.” And though this quality does become assumed over time, I would be willing to wager substantial clams that for anyone who has moved from the wonderful world of Windows into Apple OSX it really is something you never quite take for granted. That said, whereas with Windows I was always pleasantly surprised when things worked as expected, with Apple — fair or not — I am always bitterly disappointed when they do not.

Remember the good ol’ Aughts, when things were so uncomplicated. I wish I could go back there again…and everything would be the same…

I cannot say the love affair is over, but to borrow a favorite idiom: Today the AppleKory that I once thought could do anything and everything often has trouble walking and chewing gum at the same time. Want to whistle while you work, with a little help from your onboard speakers? Not a problem as long as you don’t mind your tracks skipping with each change in your CPU usage. Like to channel your music through your Hi-fi, system-connected via Apple Express connected to your Wi-Fi? Might work today..might not. Keep more than three tabs open in your browser at any given moment? Beachball. Edit photos in iPhoto with iTunes open at the same time? Beachball. Work in Google Docs while occasionally hopping over to TweetDeck to see what you are (not) missing? Beachball. Copying a file from one system to another with anything else open whatsoever? Beachball. Beachball. Beachball.

A feeble argument can be made — and has been made — for laying AppleKory’s problems at her own feet (whereas Dell Technical Support’s favorite solution has long been “Reinstall Windows.”, Apple’s “Upgrade to a new system.” is far more cheeky and charming, capitalistically speaking). As a Technical Writer, however, with over 20+ years experience in hardware and software (read: born system troubleshooter) I am able to spot a trend, and the abundant evidence shows (and is echoed in copious Googling and Binging search results) that the loss of that Apple “solid” feel is at least as much the fault of Apple’s more recent OSX iterations and their traditionally half-baked software.

With the release of Snow Leopard, the seventh iteration of OSX, instead of the usual New-Feature-This-New-Feature-That Apple impressively went against trend by targeting improved performance, greater resource efficiency, and the reduction of OSX’s memory footprint (and they lowered the price to an unheard-of-at-the-time US$29, too, to increase adoption). I remember being deeply impressed by this tack, and perhaps even more impressed by the Snow Leopard OSX experience. Subsequent iterations, though — Lion, Mountain Lion, Mavericks — have seen Apple returning to the featuring of features (while trumpeting the stability stuff), and today the company is very much in need of a “Snow Mavericks” release designed to bring back the “solid”. Lest I start daydreaming about taking AppleKory for a ride in my car.

*In the interest of full transparency I need to mention that the slain Dell computer was at the bottom of a short stack of client-provided laptops that I have used and set aside over the years as each new one came down the pike, one that had lost every shred of possible value save for doorstop (and I have plenty of those). For the ever-curious, the systems that comprise said stack are all EOL (End of Life, and thus not deemed worth the cost of return), not legally mine (which explains why I didn’t eBay ’em and pocket wads of cash), and creaky lame (I am the Jerry Lee Lewis of computer keyboards).