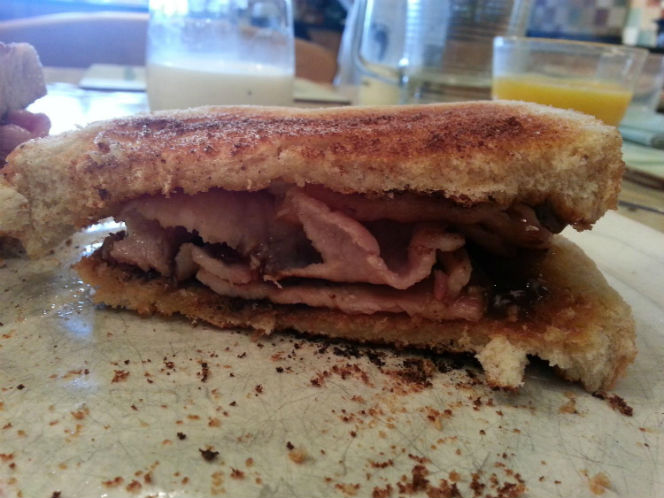 This weekend we are featuring the humble bacon sandwich.  I say humble but really the bacon sandwich is royalty in the culinary world, on a par with the finest dishes served by the best chefs in their Michelin starred mansions.

There are many ways of serving the bacon sandwich. Individuals will have their own views as to the best way and who is to say they aren’t all right. This is a highly subjective matter. In the analysis that follows the various variables for each aspect of the making of a bacon sandwich are discussed and my own preferred recipe is offered as a benchmark. Rank others in comparison, better or worse, as you see fit.

The choice of bacon is of fundamental importance. In the first instance any bacon that comes in a package labelled BOGOF should be avoided at all cost. This will be cheap water filled rubbish. The slices will be so thin you will be able to see through them and when cooking  the bacon will emit a yukky white substance that apparently is part of the preservative injected into the meat during processing. The water will steam the bacon and you will find it very difficult to get the right “finish”.

Reality is it is difficult to find any bacon that doesn’t have the white stuff in it. Experimentation will allow you to identify the brand that suits you best.  Look for the words “dry cure” and “thick cut”. Your are most likely to find the best bacon at a real butchers and not in a supermarket. You have been warned.

There is a valid debate on whether to use back bacon or streaky. Streaky is undoubtedly more flavoursome due to its having more fat but back does tend to provide a meatier filling. The American habit of over-frying streaky is usually to be avoided and American bacon tends to be too salty.

The best bread to use for a bacon sandwich is undoubtedly crusty white unsliced. You can use pre-sliced crusty white but the uniformity of the slice doesn’t quite feel right. Self-slicing produces a variation in cut that suits the rustic nature of this sandwich and makes for a different culinary experience at each meal1.

The mass produced sliced white bread that comes with brand names advertised on television is not appropriate for a bacon sandwich unless you are a guest at someone’s house and your host is providing the breakfast. One assumes in this instance that a considerable amount of beer was downed the night before and you are pretty grateful for anything that staves off the after-effects of the evening.

Under no circumstances should brown bread be used and if rolls are the only option the posher they are the better.

The debate over toasting has raged long and hard. Toasting the bread for your bacon sandwich is perfectly acceptable though it is a shame to do this if the bread is really fresh. Toasting crusty white bread more than two days old is the preferred method for this age of bread.

The bread/toast should be buttered. Margarine doesn’t cut it. Some people are known to prefer no butter. Whilst this is acceptable it should be understood that a bacon sandwich made without butter is never going to attain perfection.

A no brainer really. Frying always produces the best flavour in a bacon sandwich. Grilling shrinks the meat. Lard is the best option for oil although it is recognised that the use of lard is controversial to the point of unacceptability in our modern health conscious society. Cooking oil is an acceptable alternative and need not be applied in large quantities. The fats from the meat will soon seep into the pan and provide the ideal base for frying. If cheapo bacon is being used then grilling will at least allow the water and white rubbish to drip off but you should take care to at least double the number of slices planned per person.

A minimum of two slices of bacon should normally be used but three or more are acceptable. Ideally the bacon once fried will have some crispy fat bits and some darker brown areas on the meat itself.

Unlike sausages which benefit from slow cooking, for best effect bacon should be cooked on a highish heat. We are looking for the right combination of softness and crispness and a slow cook will tend to err towards the soft side.

By seasoning I mean red sauce/brown sauce/no sauce. This is entirely a personal choice. The purist will almost certainly opt for “naked” but I am a brown sauce man. HP only. You can tell the difference. Tomato ketchup should be reserved for burgers and hot dogs.

It is perfectly respectable to experiment with different varieties to accompany the basic bacon filling. Mushrooms (fried) tomatoes (fried or uncooked – as you like) or even lettuce and tomato for the classic BLT are fine with added mayo. Bacon and lettuce without the tomato is a bit weird and should probably be avoided. Other filling combinations may be possible but are straying well away from the pure form. For example bacon and egg sandwiches should better be described as a “breakfast sandwich”.

In my experience the bacon sandwich is the one meat dish that is likely to convert vegetarians back to being carnivores (or omnivores/woteva) and I often use this as an icebreaker with people I have never met before but who are introduced to me as vegetarians – maybe at dinner. I tried this last year with a woman and she totally blanked me saying that it was never a problem. Set the tone for the whole evening. I found out weeks later that she was Jewish! Ah well!!  A vegetarian friend told me that this conversation piece was as old as the hills and very boring. Ah well!!! Won’t stop me using it though…

So there you have it. The perfect bacon sandwich uses decent dry cured thick cut back bacon, probably sourced from a local butcher and fried. The bread needs to be fresh self sliced crusty white. The bread may be toasted if a couple of days old. The bread should be buttered and contain sensible amounts of HP sauce.

Serve with a fresh pot of tea and a glass of milk.

1 I am careful to use the word meal here as opposed to breakfast. Whilst the bacon sandwich is classically served at breakfast there is no convention that suggests its eating at other mealtimes to be inappropriate.

7 replies on “The perfect bacon sandwich”

the absolute best bacon butty I have ever had was at a farm, and she grilled the bacon, then dipped the bread (ordinary cheap white sliced) into the the fat that had dripped out of it on one side, then toasted that side, put the bacon on it (so the other side was just soft white with no fat) and it was truly awesome, it was like fried bread inside.

Crusty rolls from a proper baker (no Greggs, no supermarket own brand) are very acceptable IMO 🙂

And that does sound good also. Am off to make bacon now but will probably fry the bread in butter to help the bread 🙂

Just had the ‘farmhouse method’ – albeit spreading the bread with butter and frying on one side of both slicee. Bloody lush it were!

We had it again this morning too with fresh coffee. Laura like it, albeit it was ‘weird’ as the soft outer bread belies the contents 🙂