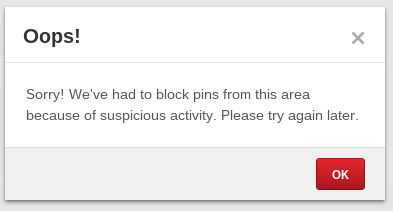 Curious one this. I currently manually do “shares” for blog posts, one of which is with Pinterest. It’s to make sure I reach female readers.

The predominance of blokes amongst the engineering fraternity doesn’t totally do it for me.  I am all for equality of the sexes etc, or so Mrs Davies instructs me. On that basis I have to reach out to demographic communities other than just the majority of attendees of UKNOF meetings1.

This post is nothing to do with who uses Pinterest though, although in some respects it does. Just makes me wonder what the suspicious actitivity is. It’s not at all fair really. The mind is now racing wondering what they could be referring to?

Has someone been posting naughty photos? That would be naughty. I’m sure there are better places for such artefacts. I know not where, genuinely.

When mentioning “area” are they referring to my IP address, that of ISP Timico, or are they referring to Lincoln? My home town. Questions questions. Timico subscribers are in the main business customers. Surely nobody would be using their employer’s internet connection for suspicious activity! Surelement.

Anyone shed any light here?