Someone asked me, “What is the future of VoIP?”

I can’t even predict my future living situation, let alone the fate of the Internet.

I went to dinner last night with an out-of-town friend. We met some other friends down in a part of south Austin that not long ago was a dinky mostly-Hispanic neighborhood, complete with dinky houses and dinky Mexican restaurants. On this occasion, though – and I understand this is pretty much the norm now – we waited over an hour for a table at a restaurant called El Chile. On a Monday night.

What’s going on? Is there some festival in town nobody told me about? All of us are baffled. And more than merely baffled we all lament our missed opportunities, having not bought more real estate in Austin in the 90s.

Back in 1992 I lived in a little cabin off of West Mary Street in south Austin, close enough to the railroad tracks to high-five train engineers as they passed by my window. And when I say “little”, I mean that place was small, with a ceiling low enough that any person of average height could extend their arms overhead and press against it. I was reading a lot of existential literature back then. The guys who lived in the other half of the cabin dropped a lot of acid, and I had a standing invitation.

I realized one day that I had to make a life change, when while reading one of Henry Miller’s diatribes on the value of excrement I found myself saying, “This guy makes a lot of sense.” That was too much. I couldn’t go down that path. I laid down the Miller, and the Sartre, and the Nietzsche. I cleaned up. I sobered up. I resurrected my forsaken programming skills, and I went to work, launching a career in software development.

Computer science was not a profession on the radar when I was a kid. Instead, it was called Data Processing. A bunch of guys huddled in the basements of tall buildings who wore pocket protectors, button-down white shirts, and who carried slide rules. And I am not talking caricature. I met these guys, being friends with various adults who worked near the data processing department, and that is how it truly was. The image from the 70s of the stereotypical weakling engineer getting corporate sand kicked in his face? Based on fact. Those programmers were not among society’s movers and shakers.

Nowadays, it’s like those old E.F. Hutton commercials. (I know, you’re too young. Google it.) These days in a post-9/11 world, where the dot-com bust has faded in memory, the guy who launches the latest greatest IPO has the ear of the tech world. When programmer geek-nerd talks, people listen.

And who is that? Who has everyone’s ear these days? Is there anyone who can really track where technology is going to be in 5 years? In 2 years? Next year?

I’m sitting at dinner with my friends – instead of waiting an hour behind a line of hipsters we walk across the street to another restaurant called Bouldin Creek Coffeehouse that offers a Slacker Buffet: rice and beans. Perfect – and we start talking about missed opportunities. I tell my out-of-town friend that the little cabin I occupied in 1992 is probably selling for $500k these days, and he — correctly — winces in disbelief. 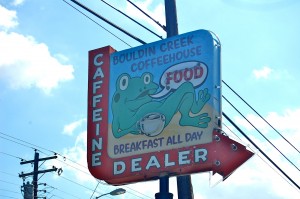 Another friend at the table worked at Microsoft for a time, and he tells us of one project manager who got in early and cashed out with $20 million. This person then created a startup with that money and sold a grand total of 13 units of her product, 5 of which she bought herself. $19.8 million burned through. Riches to rags.

Some people who end up in the right place at the right time come to the (wrong) conclusion that they are geniuses. Others realize the nature of luck and don’t ascribe their success to their personal abilities. And still others have to fail and succeed several times before their true abilities shine through. Time reveals the truth.

Who came out on the winning side of last year’s technology?  Is that going to be the winning horse in the next race?

I worked with a woman who left PCs Limited in 1988, just before that company changed its name to Dell Computer Corporation. She kicks herself to this day. How could she have known? I kick myself sometimes for not re-investing in Apple in 2008. I kick myself sometimes for not investing in Netflix. I try not to dwell in regrets or on those blind spots of the past, though, opting instead to derive what lessons there are to learn from it all.

The fact is that there may yet be some value in the words of Henry Miller, who wrote:

“This is the greatest damn thing about the universe. That we can know so much, recognize so much, dissect, do everything, and we can’t grasp it.”

Over this past week I spent time trying to grasp the future of data and voice over the Internet. It’s just an area of focus. There is no end point. There will never be a point where it’s all understood.

I am reminded of something the wise old Tallulah Bankhead said:

“If I had to live my life again, I’d make the same mistakes, only sooner.”

So I guess this is it. It is the time. Get on with it.