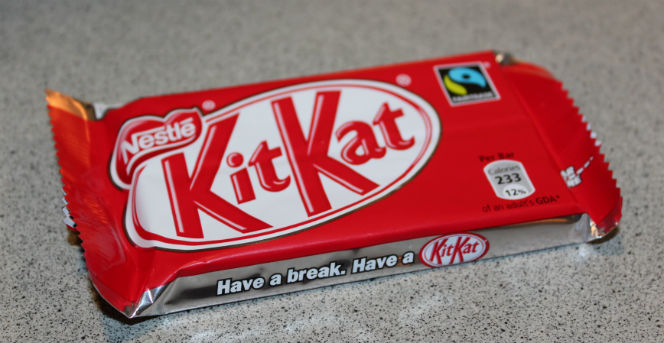 The question of the day is what is the breaking strain of a KitKat? This came up in conversation in the Strugglers last Friday “early doors”. I don’t recall the context, it was in the pub. In the pub these things have to be written down, or immediately forgotten.

The act of writing things you hear in pubs used to be done on the back of beer mats. Nowadays it’s rattled off in an email addressed to oneself which is what I did in this case. Saves a fortune in beer mats. Extends their useful life. People will no doubt still vandalise beermats, primarily in the execution of the “who threw that beermat” joke whereby a couple of tears are made in one side of the mat which is then affixed to the nostrils. The person stands up and utters “who threw that beermat”. Always gets a laugh. Ish. The how many beermats can you flip game is not described here as it is not destructive to the beermat. I digress.

Continuing with the digression one has to ask oneself how many good jokes heard in pubs have been forgotten because they weren’t immediately written down. How many great ideas have foundered on the beer washed rocks of the tavern, inn or public house? 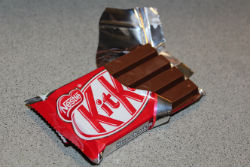 Lots. When I was a student in Bangor I used to occasionally hitch-hike the length of Wales to visit my grandmother who lived in Cefneithin, a small mining community between Llanelli and Caerfyrddin. She had a traditional Welsh approach to meals. A cooked breakfast would be followed by elevenses, lunch at 12, afternoon tea at four and then dinner at 6pm at which point, after a respectable interval I would be kicked out to the pub and return home to a plate of ham sandwiches waiting for me in the kitchen.

On one such occasion I went to the pub and woke up the next day to find a beermat with the words “parrot” and “coal” written on the back. They were the key points to a great joke I’d heard the night before. Only problem was I couldn’t for the life of me remember the rest of the joke. Ah well.

This doesn’t get us any nearer to answering the question of the day. Before we can answer we have to agree on the unit of 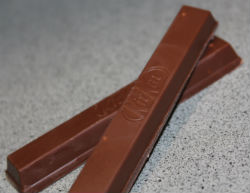 measure used to define the breaking strain. If you look up “breaking strain” on Wikipedia you find yourself redirected to a page about Deformation mechanics. I had hoped to come up with a post here that illustrated an intellectual grasp of the necessary physics associated with KitKat breaking strains described in an easily understood way that further showed me as a true man of the people.

In the interest of finishing off this post to our mutual satisfaction it is still necessary to somehow define the breaking strain of said KitKat. A sensible way to do this might be to describe it in terms of thumb pressure. This however brings with it problems.

Experience tells us that a four finger KitKat will be easier to break than a two finger job, assuming that you’re trying to break it along the vertical central line1. This is because the additional width of four fingers over two fingers brings with it twice as much amplification of force due to leverage from the sides of the KitKat.

The breaking strain will therefore vary dependent on the size of the KitKat. We don’t need to worry about that here but in the table below the differences are examined. Laboratory testing (in the pub) has shown that there are distinct grades of thumb pressure:

That’s it as far as KitKats and breaking strains go. Hope this has been of some use. Look out for future posts on quantification of willpower when offered another beer. 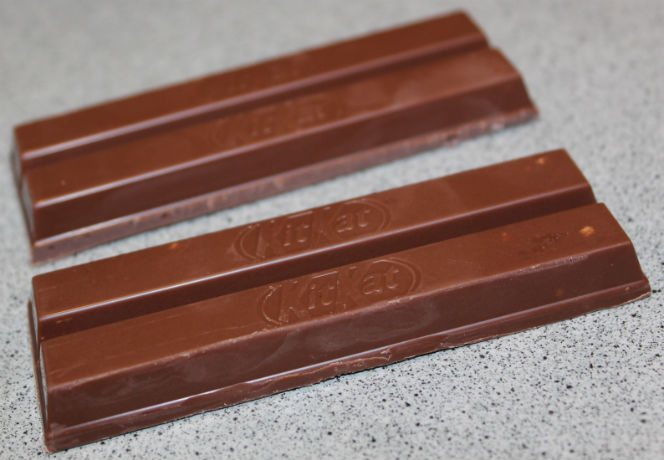 1 For the purpose of this exercise we assume that the KitKat is to be broken into two equal halves along the central line. Breaking off one finger with three remaining requires totally different physics. We also assume that the KitKat is not being broken across the middle of all fingers. Ironically to do this for four fingers takes more effort than for two which is the total opposite to the scenario first described.

3 replies on “Breaking strain of a KitKat – official definition”

Is the force related to temperature, which also affects the amount of chocolate deposited on the fingers?

Yes Peter. Problem is we are entering complex territory. As chocolate melts it makes the fingers slippery an can really mess up the table of thumb pressures.

Gutted, I read the whole article before realising it had nothing to do with Android 4.4 KitKat :-/