I could just leave it at that but I’m sure you want to know more.  This was a note found in a Cisco UCS  chassis when it was delivered to the new Timico data centre in Newark. Funny  huh?!

Well with the same shipment came a UCS B200 blade that was DOA (Dead On Arrival).  Not so funny huh? Fortunately BT iNet replaced it with another in short order – well done BT iNet.

I would expect there is an investigation under way at Cisco. It is too much of a coincidence for it to be accidental.

It takes me back to my time in the semiconductor industry where chip designers used to leave little messages etched in metal in spare areas of silicon. One guy I know, who shall remain nameless, etched “live fast die young”. This was only discovered after they made the chip. Unfortunately it was on a high reliability product expected to last a very long time. They had to redo the metal mask. Expensive.

Being intelligent enough to hold down a job as a semiconductor designer he did get his grammar and spelling right unlike whoever wrote this note:)

I do quite like the idea of writing things in the stars though. The concept is doable. You just have to blank out the stars that you don’t want to appear in the writing. I leave it to you to decide how you go about doing that (micro-managing ain’t my thing).

The message would only be viewable from a certain footprint on earth but I’m assuming here that it is intended for a loved one whose location would be known to you. Let us know.  When you’re dead you can do anything, or not as the case may be.

If I were you I’d forget about it, live long and enjoy it while you can 🙂 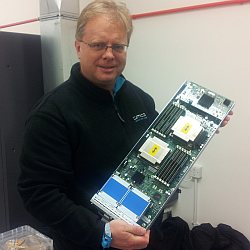 go for the the 4Gigs of RAM with 1Terabyte hard drive or the 6 Gigs which is a little bit more expensive then cop this baby.

Personally I opted for the 96Gig of RAM with dual 10 Terabyte hard drive (expandable) and dual 6 core Xeon processors.  You get my drift?

We have ten of these in two chasses of 5 just to get going. Note the Cisco UCS B200 blade server does come with two onboard hard drives but the discerning host will of course ignore these if he is at all interested in MTBF. Everything else on the board is solid state. 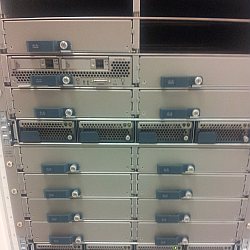 The next picture is of the chassis front and back.

Front view just has the one blade in it at the time the picture was taken.

You can see the four power supplies (N+2) in a line below the blade (circled on the larger photo – click to see). The last two photos are the rear of the chassis fully populated with fans – cool I thought ( 🙂 ) and the schematic that is printed on top of each blade – it will interest someone. 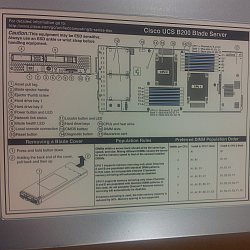