I was so impressed with Terry Hughes’ review of the Google Chromecast that I decided I should get one meself. It arrived yesterday and I’ll be plugging it in later today.

I’m not much of a TV watcher but we’ll see how we get on. Let’s hope there are no cookery, DIY, self build etc programmes on to compete with the TV slot – we only have one TV which I know will seem strange to many of you.

This graph of  percentage IPv6 adoption by country as of today, 14th October 2013, was extracted from potaroo.net. It shows the percentage of internet users in each country using IPv6. You can get the exact numbers from potaroo. The UK’s 34th place suggests we are seriously lagging behind. OK we can look at it in terms of actual numbers of users – see the next chart below.  We are 13th one this one but take a look at the top 5 – all major competitors in the global commercial stakes. 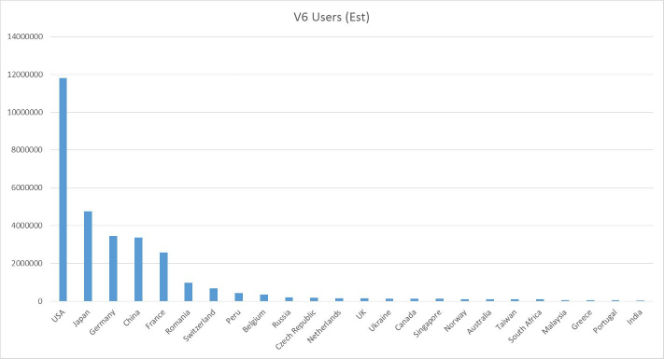 These charts don’t show us how IPv6 adoption is moving with time for each country but I don’t get the feeling it is proceeding with any pace here in the UK.

Whilst we are on the subject of UK competiveness it is also worth noting that the annual Cisco Visual Networking Index is forecasting an average global broadband speed of 39Mbps by 2017. Ofcom reports that in May 2013 the UK average broadband speed was 14.7Mbps. This does fit with the Cisco forecast but to keep up with the game there is a lot of work to do to hit the 2017 number.

The base technology roadmap is there in the UK – you can now get FTTP on demand at 330Mbps. It’s going to take ultra high def TV delivery over broadband to drive the market. I think we are still relatively early days in this space. Fibre To The Premises with a performance of 1Gbps and up is still the end game.

There’s been a lot in the news about the Government’s Safety Summit where a number of consumer  ISPs and online entities (such as Google) have been asked to attend a meeting to discuss how they can do more to prevent people accessing illegal online child abuse material.

Sometimes when this kind of news hits our screens I don’t bother to comment. It seems like every man and bonzo gets their word in.

It is worth however emphasising a point made this morning by The Today Programme on BBC Radio4 which was that there are two issues here. One is accessing illegal child abuse material and the other is preventing children accessing legal pornography.

Access to illegal online child abuse material is totally wrong and the ISP industry already works to stop accidental access to this stuff via the Internet Watch Foundation which produces a list of sites to be blocked. Most of these sites reside outside the UK and really it needs a concerted global Government effort to take them down. They should discuss it at this week’s G8 Leaders’ Summit.

Consumer ISPs have measures in place to block access to these sites where they are known. However the nature of the internet being what it is all that these measures do is to prevent someone accidentally landing on an illegal page. The determined sicko will easily find a way around the blocks. Interesting to note the BBC report that the Government has actually cut funding in the area of online child protection (CEOP).

There may be a discussion to be had with Google and other search engines (are there any others?) re how they themselves prevent illegal material coming up in search results but it seems to me that the real issue here is how we identify the sites so that they can be included in the IWF list and ultimately taken down.

Regular readers will know that this is a very glamorous job. Hard work though so when I have a free day as was the case last August Bank Holiday weekend I like to pack the family off somewhere exotic where we can all relax and enjoy each other’s company without being distracted by work and the internet.

This video was taken at Jubilee Park campsite in Woodhall Spa at the height of the British summer. Why go abroad eh? There was calm after the storm as the header photo shows – click to see more.

I’m at LINX78 the latest quarterly meeting of the London Internet Exchange. This meeting is particularly interesting because it comes immediately after the Olympics and its attendees represent the vast majority of UK internet access networks. In other words the people responsible for making your web browsing experience a good one during the Olympics were all here.

This community of engineers should stand up and take a bow as part of the team that made the event a total success. Whilst there will be the odd exception and glitch the network of UK plc performed incredibly well. From a personal perspective although I was on holiday I kept in touch with the office from time to time.  The level of support calls in to the Timico NOC was as we would normally expect and we got the additional network capacity planning just right which is hugely satisfying.

CEO John Souter described the “Olympic  effect” seen at LINX in the run up to the games. Since LINX77 in May the exchange has seen a 20% increase in traffic capacity growing from around 5Tbps to 6Tbps. In a single month over 60 10GigE ports were installed as part of a capacity growth that month of 800Gig (including the first 100Gig port connected by BT).

The rush was prompted by a June 19th cut-off date for new capacity needed before the 14th July Olympic change freeze at LINX.

If you need some perspective consider that the average UK broadband speed is less than 10Mbps. The 6Tbps capacity is the equivalent of over 600,000 broadband connections running flat out. It’s not really a good way of looking at it as there are many other factors that need to be considered – networks have alternative routes to the internet , broadband connections not running at capacity to name but two. However it is a testament to the efforts made by the UK network operator community to ensure that their contribution to the Olympics was a success.

Note I’m told that the Dept of Business Innovation and Skills (Vince’s lot) asked for a daily report on how the LINX network was performing – such is the critical nature of this infrastructure. LINX is going from strength to strength. The exchange currently has 431 members with 64 having joined this year (that’s up on the 49 new members for the whole of last year).

If you see a network engineer pat him on the back and buy him a beer (several beers knowing the engineers I know).

I sent my mum a mother’s day card. Posted it Thursday and she got it today. Actually I didn’t really send it, my wife did so I don’t know if a second class stamp is to blame for it not getting there for the weekend.

Last night I bought a book from Amazon.co.uk. I had the choice of delivery by 1pm on Tuesday for a fiver or 5 day delivery included in the price of the book. The book itself was only £9 so I went for the free option. It will be here by the end of the week I imagine. If I wanted to fork out a one year subscription for Amazon Prime (£49) I could get all my purchases delivered free of charge next day.

I also ordered a new part for my car on Friday. They have promised it will be here on Wednesday. The part was

END_OF_DOCUMENT_TOKEN_TO_BE_REPLACED

2012 is expected to be a big year for growth in broadband Internet use in the UK. We have the Olympics, para Olympics, the Queens Diamond Jubilee, Wimbledon and the West Indies, Aussies and South Africa over on cricket tour (if I was them I’d be avoiding this country next summer but hey…). Oh and let’s not forget the European football championships from 8th June til 1st July. England qualified I believe?! 🙂

There is more sport but by far the biggest Internet traffic news item for 2012 is that Netflix is coming to the UK. For the uninitiated, Netflix is a movie screening service in the USA that accounts for something like a quarter of all Internet traffic in that country.

At LINX75 today the launch was a particular subject of discussion

END_OF_DOCUMENT_TOKEN_TO_BE_REPLACED

Interesting to see the importance of good web design in action. We have been running a campaign to sell BlackBerry Technical support. Despite not being trendy anymore many businesses out there use BlackBerry and we sell support.

Initially we were seeing quite a bit of interest but not seeing page views convert to new business. The old landing page was too much like a brochure with not enough “call to action”.

This was changed and we have immediately seen a substantial increase in business taken via the web. Over time we are going to systematically evolve our whole web strategy taking on board lessons learnt.

END_OF_DOCUMENT_TOKEN_TO_BE_REPLACED

This is an extract from Nominet CEO Lesley Cowley’s speech at last week’s Nominet 25th Birthday party. She very graciously sent be a copy at my request because it contained some really interesting snippets worth sharing – so here goes:

25 years ago, the first .uk domain names were registered by a few individual internet pioneers. There are some interesting facts about the early days of the UK Internet:

As things became consolidated uniformity crept in and the .uk domains as we now know them came into being.

END_OF_DOCUMENT_TOKEN_TO_BE_REPLACED

A few statistics jump out of the page of the Office Of National Statistics (ONS) report entitled Social Trends Spotlight On: e-Society.

In 2010 73% of UK households have internet access. If we take the 2009 statistic that only 90% of these had “broadband” then we can assume that around two thirds of the country has broadband. Coincidentally 64% of children aged 5 to 15 had used the internet for schoolwork or homework at least once a week. One might interpret this as saying that the 1/3 of children without broadband were unable to access the internet for schoolwork. I realise that is a bit too simplistic but is certainly does highlight a problem.

87% of French people are “very worried” that their child might become the victim of online grooming.  This is in marked contrast with the UK where the number is only 32% (Slovakia is 10%!).  There are a few ways of reading this:

END_OF_DOCUMENT_TOKEN_TO_BE_REPLACED

This is certainly being seen at Timico where our streaming traffic is up 357% which is even higher than yesterday’s reported budget watching traffic.  This was itself a record 309% increase. Twitter is struggling this afternoon and the live football stream from the BBC on my 100Mbps connection is not great so – now you know why.

Photo below is a screenshot showing global network hotspots.