2012 or as the BBC puts it “Summer of Sports on Steroids” 1 is going to be another milestone year for the ISP industry with the UK playing host to the Olympic games and another record anticipated for internet traffic levels. On Wednesday at the ISPA conference we had Jane Weedon, Controller of Business Development at the BBC talking about their preparations for the games.

The coverage in 2012 is going to be comprehensive with pretty much 100% of the sport available to watch as it happens – up to 27 simultaneous channels at the peak towards the end of the second week. This will have grown from perhaps 15-20% of coverage at the Sydney games 35% in Athens and 65% in Beijing (click on the header photo for graphic illustration). 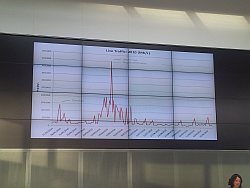 v Slovenia match. For perspective this year so far iPlayer traffic has peaked at 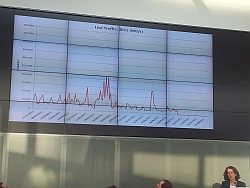 So look out ISPs.

The forecasting of traffic levels for these games is in reality going to be very difficult. On the higher demand side the games are on home territory and will appeal to a wider demographic than the Football World Cup. To counter this device proliferation may lead to the streaming being distributed over a wider range of media – 3G mobiles and tablets, public WiFi zones, offices providing big TV screens and the fact that many folk may well take the two weeks of the games off on holiday.

Medals success for Team GB is also going to be an influencing factor.

The Beeb has gone into significant detail in estimating demand on a session by session basis and has come up with a forecast of  10 x the traffic levels for London as they saw in Beijing. That’s 1Terabits a second 2  at the peak in streams averaging 1Mbps.

That’s enough Olympic bits for the moment but there is so much interest in this subject looking ahead I’m going  to be looking out for more Olympic stories to share.

I think you perhaps mean Gbps rather than Mbps given the data shown on the iPlayer traffic graphs?

Thanks Robin – I was obviously in a rush to finish off on a Friday. I’ve corrected it.

Surely the key here is to enable multicast for the live streams, I know the Beeb was testing this some years ago, did anything actually happen with that?

I fear that, as before, the ISPs will put in place appropriate upgrades to peering capacity and routers but the bottlenck will be on the BT side of things as exchanges are overwhelmed with demand.

Don’t think it got anywhere. BT did announce a content delivery product that could only be taken advantage of by BT Retail and Plus net. The fact that this was announced through BT Wholesale was a bit of a red herring in my mind and could have been interpreted as a way around the Significant Market Power/Competition issue.

Think you are right on the money there Tref.

I’d really like to see BT put on a level playing field with the rest of the service providers and as I’ve mentioned before that to my mind means making Openreach a mutual company owned equally by all the ISPs in the UK.