In all according to Google Analytics there were 162 referring sites over the 5th and 6th January. A Google search for tref & “world record” uncovers around 53,400 results so the overall exposure was much higher (a lot of duplicates in there probably but it gives you a feel for the scale of things). Google Analytics misses a lot of links in my experience.  Forums and blogs were good  contributors of links.

Most of these links would have been sourced originally via one of the social media platforms – an obvious guess and in order of importance would be Twitter, Facebook, Google + and LinkedIn, the latter two being poor cousins.

From a WordPress technical perspective the event went without a problem. There was an initial glitch with the WordPress setup where the number of guest comments were limited to one every 15 seconds.  We caught this early thanks to feedback from the first commenters.

The blog was effectively “opened” up to comments with little in the way of protection from spam – Akismet was deactivated for the day (it’s back on now). This was a risk but was done to minimise any hurdles to commenting and to reduce load on the servers that might have been occasioned by filters such as Akismet or Captcha.  In reality the servers were massively overspecified for this event and would not have had a problem – this will be the subject of a tech blog in the very near future.

Interestingly the native WordPress anti-spam controls still caught spam – anything with more than one URL in the comment. Louis Vuitton handbags seemed to be the main area of interest that day!  I am not aware of any serious problems that arose from the ”opening up” for comments. If we were going to get the hoped for level of traffic it would have been the only way to cope.  As it is with the numbers we did get this would still have been the only sensible way to go.

On the 5th jan we had 9,449 visits,  7,804 of which were “unique”. At its peak the blog was taking one comment every 8 seconds. At this time there were a significant number of active visitors at any one point in time – screenshot shows 162 but it was seen to go up to the 190s. 5,455 comments were left in the 24 hours (subject to final adjustment once I have verified the logs).

The comments were not from unique visitors ie someone could comment more than once if they chose, just as you would on a normal online news or blog post. The ratio of donors to comments and visitors 112/5,455/7,804 shows how difficult it is to raise cash.

The average time on site was, at 4:41 minutes, considerably more than the usual 90 seconds although 4 minutes is quite common for a popular/more detailed blog post. The 3.38 pages per visit is also up on the norm of just over 2. This could be due to the higher than usual number of new visitors (75%). The fact that 2,311 of the visitors were regulars to the site was gratifying – thanks for the support guys.

The number of visitors to the site seemed to be around twice as much as those leaving comments. After a few hours this made me cut down the size of the post. Perhaps it was too long – I had to fit in acknowledgements and an incentive for people to leave comments.

This incentive was a suggestion that people link to a person or organisation that has been inspirational to them and who will make a difference in 2012. In practice few people left such a comment. The charitable aspect was enough. Most comments were of the “good luck, hope it goes well” variety. So the “incentive” was pulled in the interest of shortening the post. I still intend to filter through and pick some good causes from those relevant comments.

The shortening of the post seemed to make little difference to the visitors/comments ratio. Anecdotal evidence suggests that some people were checking progress from more than one device – laptop, tablet and smart-phone and this no doubt accounts for some of visits that left without comment. See notes re mobile visitors below.

Hugs to Jeff (you have to know him to understand) and Suzie (I don’t know her but I’m sure you understand) and firm handshake to Jason for helping here (ok hug if you want). I know Jeff but I’m sure that the latter two get inundated with requests from UK fans for retweets so thanks again. It would be nice to understand how many people left comments as a result.

There were other “celebrity” tweets or tweets from influential sources that perhaps didn’t make the #comment24 report. Occasional references were left indicating reason for commenting/source of link.

Anyone commenting with a Twitter account was encouraged to sign in using this. We used the “Simple Twitter Connect” plug in for this. Tweets generated here did include #comment24. As the total number of referrals from Twitter exceeds the number of #comment24’s found by TweetReach then it is assumed that either not everyone arriving via Twitter left a comment, or they didn’t leave one everytime they arrived or they just signed using their email address.

The JustGiving site had a Twitter integration but this could not be tailored to incorporate the #comment24 hashgtag which would have been useful. Not everyone donating tweeted #comment24.

The fact that we were using a single Add To Any icon for “sharing” rather than individual Facebook/Twitter/G+/LinkedIn buttons was also mentioned as a non ideal set up – clearly one click is better than two. Something to look at. 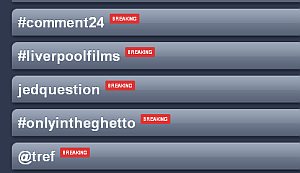 This was due to a concerted retweet effort on the part of a number of people (me included). We could probably have sustained this trend with continued tweeting but I personally throttled back as I didn’t want

to spam my followers too much. 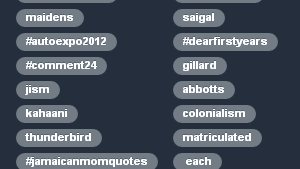 A planned retweeting effort or retweeting from an account set up for the purpose would possibly have kept the trending going.

I did get some very useful feedback re the set up of the blog for mobile. First of all the experience for mobile users wanting to leave comments was not good. One of my jobs in 2012 is to identify a suitable mobile plug in to address this.

The split between mobile and non mobile visitors is shown below

The vendor split is as follows:

This is interesting. The mobile social media/charitable types in the UK are clearly Apple fanbois. Moreover RIM and Nokia are almost on the list out of “politeness”. 70 different mobile device types were used in total.

495 of the Apple visits were from iPads with iPhone on 992 and iPod touch a creditable 46. 69 of the Samsungs were Galaxy S2 and the Desire HD was top of the HTC charts with 74.

84% of mobile visitors were new visits suggesting that people were following progress for the first time using their mobiles having commented by other methods.

25 browsers were used in total – the top 6 covers most of them.

It would seem Google owns a third of this market.

Symbian came in with 12 visits and quaintly the Sony Playstation 3 vied with “Nokia” (?) to be last with one visit each. I like the Playstation idea – play games and help charity. Microsoft has a long way to go in the mobile OS market.

This was mostly a UK based activity. To have a convincing stab at a big record we would have liked a far higher participation from the Americas although the RNLI is of course a UK based charity. Existing media relationships were with predominantly UK based platforms.

We were hoping that the world record attempt would be sufficient news to entice US bloggers to comment and thus generate more noise.

The fact that many people were preparing for the Consumer Electronics Show in ‘Vegas probably didn’t help. Neither did the initial slow uptake of comments. It took 6 hours to make it to the first 1,000 comments and 3 hours to the second. Had the USA woken up to a slightly higher level this might have attracted comment and attention. So would the involvement from the start of people with big twitter followings and blog readership.

All in all as have been described here there were a few learnings from this exercise, not the least of which is that it helps to have famous people onboard and to have a team of people working for the cause.

There is one more post to write which is the technical analysis of the performance of the platform running in the new datacentre.