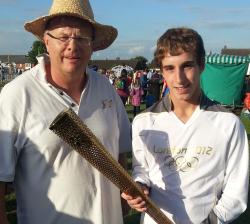 looking forward to the Olympics. I have tickets for three sports – footballing in Cardiff, Kayaking in Lee Valley North London and High Diving at the Aquatics centre in the Olympic Park. I could have bought more in the last release, including the much joked about beach volleyball but at £95 just for the ticket I decided I had to draw the line somewhere.

My own Olympic story started on July 6th 2005, the day the winning bid was announced. I was in London, doing some presentations in the City. That afternoon we celebrated alongside everyone else in town, a victory tinged only with

a slight hangover as the next day London was under attack with the July 7 bombings.

Some time later I went on a sewer tour to look at the huge amount of latent communications capacity there is in the fibres running underground in the capital. I was told that the sewer runs right through the Olympic Park. I don’t fancy being a guards having to check down there during the games. Then for the last year or so the ISP industry has been starting to think about its requirements to keep the network running during the games. It’s mostly about bandwidth.

The 2012 Olympic games is going to be all about information handling. Of course it is also about winning medals, taking part and all the good sporting stuff but this will be embedded in a communications wrap the like of which has never been seen before.

In the UK the communications build up has been massive and not without its glitches – the ticketing website and process has attracted a lot of criticism. Now that tickets are being dispatched hopefully that memory will fade.

The serious communications infrastructure preparations have been going on for much longer.  BT kicked off its network planning in July 2009 and most UK ISPs will now have
their plans in place on how to cope with the growth in internet usage during the games – basically by buying more bandwidth from BT.

The media build up has also kicked in big time as the torch makes its way around the country. A quick glance at the Facebook page of “Olympics” shows it has 2.8 million “likes”. The London 2012 page has fewer at 379k likes – clearly a newer page and a slightly lesser brand though far more specific to this summer’s needs.

There is a Facebook App “London 2012“ which with only 900 monthly users looks decidedly unofficial although there are lots of links to genuine Olympic resources. Then there is “ London Olympics 2012 “ which is clearly unofficial with only 3,435 likes. I’m not really here to comment on whether something is official or not, the fact is there must be a huge number of social media pages dedicated to the event.

Last night I went to the Olympic Torch event in Lincoln. I was a proud dad as my daughter was dancing as part of the entertainment. Everyone there had a fantastic time. There is clearly a huge amount of support for these games in the UK.

Most of the entertainment was provided by three of the Olympic sponsors:  Samsung, Lloyds TSB and Coca Cola.

The Samsung act was particularly impressive because of its use of social media. It included “Twist” and “Pulse”, apparently a popular dance duo. It was at this point that I realised how out of touch I was. I had pushed myself to the front of the crowd of 10,000 people as I wanted a good view of my daughter dancing. I found myself there with “the kids” – mostly 12 – 16 year olds I’d guess. They knew all the acts and all the words to all the songs.

Anyway at the end of the act Twist (or Pulse – you tell me  🙂 ) went on about how these were the “connected games”. All the dancers took out a Samsung phone and started to take photos of the crowd. Twist was elevated onto a platform and took a photo of the entire crowd. That’s 9,999 people (should have been 10,000 but my youngest son was playing cricket – beat Scunthorpe U12s by 10 wickets!). 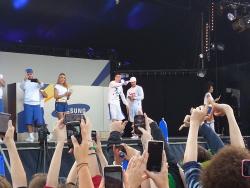 He then told us that the photo had just gone live at Samsung.com/takepart. People were then encouraged to visit the page to tag themselves using their Facebook ID. I did this – you can see me here (somewhere).

Think about this. The torch is visiting 70 locations. If there are 10,000 people on average at each location then that is 700,000 people being encouraged to engage with Samsung online.  Everone who tags themselves  are effectively providing Samsung with valuable social media marketing data. These people are also all going to tell their friends to take a look at them in the crowd and at the same time they are all uploading their own photos.

There are two types of person going to the Olympics this summer – us and them. The “us” are represented by all the punters, with or without tickets at the venue or milling around just taking in the atmosphere of London.

The “them” camp is divided into competitors, media and the rest of the Olympic family – the hard working folk of Olympic committees around the world over for a junket to oversee the smooth functioning of the games.

These games are likely to be the most technologically rich Olympics we have seen so far. BT has installed a 60Gbps core network in preparation. Despite encouragement from Samsung the heaviest users are going to be the media. 60Gb amounts to 2.7Mbps for each of the 22,000 accredited media personnel at the games. That’s around 30  x  maximum usage per connection seen at a typical business ISP and sensibly has a significant amount of headroom built into the capacity requirements.

As we approach the Olympic fortnight I’m going to be taking a more detailed look at the technology that has gone in to making it all (hopefully) a success – both from the point of view of the “Olympic Family” and us normal folk. Stay tuned.

Also check out this video of the Red Arrows flying over the Olympic torch relay event – they are  regular visitors to the skies over Lincoln. On this occasion their leader spoke to the crowd over his intercom – uber cool.