My initial diagnosis was that the two phones are not a million miles apart and in fact I preferred the feel of the S3 with its rounded rear edges. However as I play with the S4 a bit more and check out some of the new features that have been pitched I’m starting to think that there is a lot of good stuff in here that is new.

What’s better about the S4? The speed of response seems to be better. With the S3 I sometimes find myself waiting for images to load, icons to reappear on the screen.  Haven’t seen this so far. Also Tweetdeck quite often takes some time to load with the S3 but not with the S4. This could just be down to the fact that there is a lot more stuff on the S3, it being an older phone but I don’t think so – all the apps have moved over nicely.

The other pleasing thing is that all the wifi credentials have moved across and I had no trouble in getting online at home, office and out and about over the weekend using various public networks. I did have to reenter some password details for specific apps such as Facebook but once per phone doesn’t seem unreasonable.

The screen on the S4 is bigger & uses up more of the available space. If you can why not? However I wouldn’t say that the screen needed to be any bigger than the one on the S3 so this is a hmm ok nice to have but not a huge deal. I will say though that the camera is better with more pixels 13M vs 8M. Although this does result in larger jpg sizes – up to 4.5MB so far who cares.

One highly published feature of the S4 is the fact that when you look away when watching a video the video pauses. This works really well for video stored on the phone itself. It did also work when watching YouTube using the YouTube Android App though it wasn’t quite as responsive with having to manage video online. All in all I found this “video pausing” feature to be pretty cool and think it might be useful.

The gesture recognising capability also works and is cool. I can answer the phone with just a wave of the hand. I think with will be useful – if you are tapping away at your laptop and the phone rings you just wave your hand over it and it automatically answers with the speakerphone on. This also works if I just say “answer” though I’ve had to repeat it several times when I’ve tried it.

The phone also makes calls when you hold it up to your ear though I’m not sure that’s specific to the S4.

Scrolling up and down web pages also works well with a gesture (picture the ad “simply wave your hand up and down the screen and hey presto, it scrolls”) in the demo/test in “settings” but I don’t seem to have much success with that “in anger”.

I’ve seen some comments re build quality of the case and the fact that the plastic feels “plasticky” if I can put it like that. It feels ok to me though the S3, which I’ve said I prefer the feel of is starting to show quality issues with the back cover that no longer sits totally flush on the rest of the phone. I also had a number of problems early on with the S3 not charging and needing to be replaced. Hopefully it won’t be the same with the S4. So far so good anyway.

On balance if I was looking for a new phone I’d buy the Galaxy S4. I’m not sure I’d be rushing to upgrade from an S3 before the end of my contract. 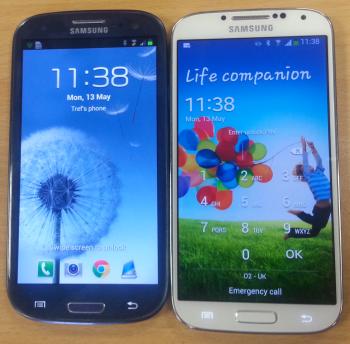 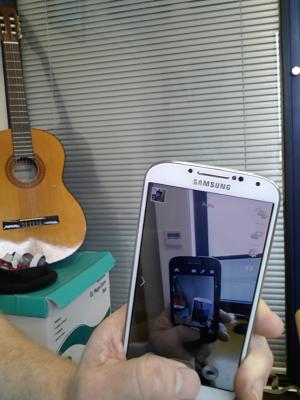 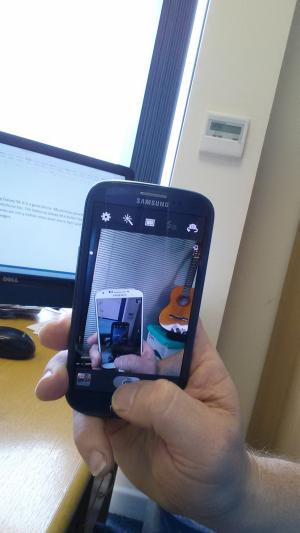 Have to say that after only 6 days of use there is a dent in the metal edge of my SGS4. I have not been particularly rough or careless with it. This does not bode well.