Regular readers — at last count there were five of you out there — are no doubt on pins and needles waiting for me to once again pick up the narrative of the search for my next phone, and today is the day I scratch the associated itch. Not that I have made a decision and followed through on it yet, mind you. No, in fact a new contender entered the mix this week, one that could very well draw out the process into early summer (though hopefully not beyond)…the Samsung Galaxy K Zoom! 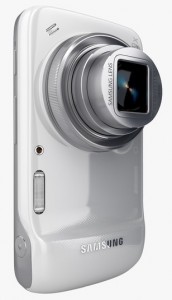 In my previous posts on this subject that has all of you talking, I rhapsodize on the camera being the all-important feature for me in selecting a smartphone, and just from that standpoint the Samsung Galaxy K Zoom is an obvious entrant. The fact of that matter, though, is that I was underwhelmed and even disappointed by Samsung’s previous It’s-a-Camera-No-It’s-A-Phone (last year’s Galaxy S4 Zoom) and never figured it’s second incarnation would do anything to change my mind. Clunky, boxy, heavy, ugly, and weird (not in a good way), the Galaxy S4 Zoom is a regular Frankenstein device, one that looks like it was cobbled together from leftover state-of-the-art gadget components and made to look synergistic through the careful application of molded white plastic and polished chrome. Of course, it isn’t all about form factor (or in simpler terms, its “looks”), but the device’s technical specs and the photos that flowed from it onto the Internet were far from money enough to make the repugnant attractive.

At best, as phones go the Galaxy S4 Zoom made a marginal camera; and as cameras go, a marginal phone.

Thus, as intriguing as I continue to find the idea of a smartphone-camera hybrid — and as inexplicably pleased as I was to find a ‘K’ in its name — I approached the announcement this past Tuesday of the the Samsung Galaxy K Zoom with strong reservation. Sure, considering technology’s incessant march I figured that the concept’s second iteration would be more pocketworthy than the first (not much effort required). Also, there was little doubt that the GKZ’s extensible lens would supplant the one unfortunate hardware “Huh?” feature of it’s Galaxy S5 older brother, that being the heart rate sensor on the back just under the camera lens. Still, even the most nimble companies typically play Generation Leap-Frog in responding to critical/customer feedback (the secondary reason, I am sure, that Apple changes their iPhone numbering only after running an interim ‘S’ generation*), so though I thought “better” was highly likely I had no expectations that the Galaxy K Zoom would begin to approach “good” prior to Gen-3.

Until I have had an opportunity to actually see and touch the Samsung Galaxy K Zoom, of course, the value of my take on this fingers-tingling-BIG-time gadget is akin to that of the pixels on your computer monitor. That said, the device presents as the first true realization of a smartphone-camera hybrid. It it contoured like a cell phone (and only a cell phone…no mistaking this hot number for a badly-designed compact camera…or a cheap 1970s walkie-talkie), yet has a true glass lens that delivers 10x optical zoom. And unlike its predecessor, which required that the zoom lens be extended manually, the GKZ extends automatically a la a compact camera (and wicked fast, too). Also, this very-cool-and-seeming-even-cooler-the-more-I-read-about-it smartphone offers a 4.8 inch HD display, comprised of a Super AMOLED panel protected with Corning Gorilla Glass. And the primary camera has a 20.7-megapixel BSI CMOS sensor, too! 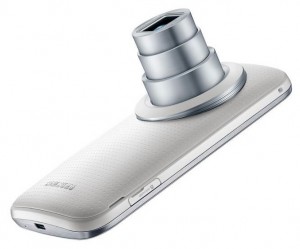 So the Galaxy K Zoom has form and it has function. Though to make a usable value assessment — and perhaps a purchase decision — I still need some idea of the carrier-subsidized price, and at this point the number of rutabagas that will be required in exchange for the new shiny has yet to be revealed. Oh, and then there is whether the GKZ will even be available in France (as of this writing it is only set to launch in Asia). Hence, while the picture presented is quite fine, it is not quite yet in full focus. Still, this new character in the Quest for Kory’s Next Smartphone adventure — drama? thriller? comedy? — has considerably shaken up the narrative and perhaps necessitated a rewrite of the ending (gotta punch those metaphors until they cannot punch back, I always say).

* The primary reason Apple runs an interim ‘S’ iPhone generation? Come on. So they can pluck maximum cash from the pockets of the legions of lemmings who are unable to bear life without the very latest iteration of the device in their possession, of course.