Over the weekend I received a Twitter request from someone unknown to me to participate in a dm (direct message) exchange. Figuring it at first to be some kind of scam or sales come-on I was just about to use TweetDeck’s “Block” function to keep the party from contacting me again when I noticed in their Twitter handle something we have in common…a four-letter sequence beginning with ‘k’ and ending with ‘y’ (and just so you know, my Twitter handle is @kory).

Since registering to use Twitter (7-March-2007) I have been approached more than a few times by other Twitter uses looking to appropriate my Twitter handle for their own use. These enquiries have nearly always been of the friendly variety — there was one guy who dealt with my “Thanks, but no.” by trying to rally his thousands…er, hundreds…well, dozens of followers into hotboxing my acquiescence (and I am happy to say that his call to action backfired, with plenty of this fella’s so-called “friends” publicly shaming him on Twitter) — and in most cases even led to mutual Twitter following for a time. Knowing what it is to grow up Kory, I understand the propensity all Korys out there seem to share in wanting to have @kory for themselves…it is simple, direct, easily remembered, somewhat unique (it isn’t ‘David’, ‘John’, ‘Steve’, ‘Alan’, or ‘Mike’, anyway), and it is short. Really short. In fact, it is that very four-letter quality that seems to stir the pot of desire more than any other, likely because the shorter your Twitter handle the more freedom with characters you can provide to those who might want to tweet to you, or retweet your tweets or your own retweets!

1,874,161. That is the number of valid four-character Twitter handles, taking into account that the valid characters for Twitter usernames include all 26 letters, the 10 digits, and underscore, and the fact that characters can repeat. 37x37x37x37. 1,874,161. One of those 1,874,161 is my @kory — yet another is trefor.net’s very own Trefor Davies’s @tref — which I first used to tweet seven years, three months, and three days ago. So with so many four-letter Twitter handles to be had, why is my own proving so popular? Silly question, I say, as any self-respecting Kory on Twitter must certainly aspire be @kory! Would be and should be thrilled to be @kory!

So pea-cocking aside (maybe just a little more…being @kory really is terribly cool, but it pales in comparison to this), I need to give some credit where it is undeniably due as I didn’t just stumble into the Twitter scene early enough to be the 817,772nd registrant to the service. No, the reason I am one of the First Million Twitterers (and before you can ask whether that is a real select club I will stop you with a “Heh. You’d like to know, wouldn’t you?”) is because long ago I hitched my social media caboose to the barreling-fearlessly-into-all-things-social-on-the-Internet phenomenon that is Jeff Pulver. I won’t go into deep detail here on Jeff’s exploits, antics, and achievements in social media as just a wee bit of googling and or binging will tell his story far better than I can here. I will say unreservedly, though, that were I not attached securely to his new technology bullet train it is far more likely I would be @kory498852 on Twitter and not @kory. So kudos once again, @jeffpulver. 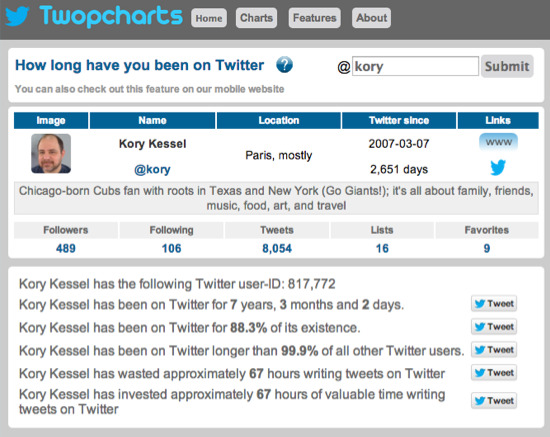 Getting back to my story, the tweet I received at 06h09 on 7-June-2014 simply said, “@kory hey man dm me when you get this”, from a Twitterer (Tweeter?) going by “@korycomtois”. Being a diligent type, once I had decided not to immediately block this fellow Kory I clicked over to his Twitter page to learn what I could, which honestly wasn’t much. Still, @korycomtois looked harmless enough. Also, I am almost always up for a little back and forth, and — who knows? — maybe this would be the magical Twitter exchange that would change my life, thus I tweeted back. It took another day to get our DMing ducks in a row (my fault as although @korycomtois was following me I was not yet following him), however before weekend’s end we had made contact. And sure enough, @korycomtois was keen on ending my reign and assuming the @kory crown.

No doubt, there is a question lurking on the collective tongues of my readership, that being whether I have ever been offered actual cash money for the @kory handle. The simple answer is…I think so. I think so because although numbers have been bandied about — back in 2011 one seemingly determined soul went as high as $5000 — I have never encouraged or considered such offers to the point where the nuts-and-bolts of actual payment and follow-through became part of the discussion, and as such I cannot definitively say the offers were legit (and, yes, that $5000 offer did get me thinking for a short while).

@korycomtois wrote, “I am very interested in it (your handle), would you ever consider parting with it?”, and when I wrote back I mentioned that I had once turned down $5000 for it and asked whether he was prepared to offer “an amount that is worthy my giving it a re-think”. I didn’t have to wait long for a response.

“I’m sorry I cannot come close, I am a high school student that just wanted my first name as my handle.”

Young Kory went on to apologize for wasting my time (he hadn’t…I found myself delighted with our exchange, his politeness, and just the fact that he steeled himself up and asked the question as so many would not have), and we parted as fellow followers, for the time being at least. Then earlier today, seeing a tweet @korycomtois posted I found myself dwelling a bit on the connection. Here was a kid who when I first leaped onto Twitter was at most 11 years old (The Boy is a year past that), who joined the service 1,151,558,938 Twitter accounts after my own @kory was issued (not a real number as at some point Twitter skipped whole swaths of numbers…a fun one nonetheless, though), throwing a flag out into the ether hoping for a connect and a magical Twitter connect that would change his life (or, at least, his Twitter handle). Jiminy!

So I say this to @korycomtois: I am going to hold onto @kory for now and into the foreseeable future, but you have my solemn word — 140 characters of it — that when the day comes that circumstance or decision results in my vacating @kory it will be yours to carry forward.