Yesterday a friend of mine in the UK asked me if I was “going to watch the football”, stating his own excitement over the soon-upon-us 2014 FIFA World Cup Brazil (the official label of the event, if the website is any indicator), and then asking “Have you converted a little? Soccer to you, I guess.”

I actually converted 20 years ago as a direct result of the excitement surrounding the 1994 FIFA World Cup. Of course, the football punditry out there will immediately assume that this American finally clued in that year due to the tournament being held in the U.S. for the first (and so far only) time, however that assumption would not only be disingenuous but wrong too. No, my sports imagination was finally captured by International football in 1994 not because I was swept up in host country hoopla, but because I was living/working/traveling Europe that year and found myself instead swept up in the remarkable national enthusiasm and spontaneous celebrations I encountered in England, Scotland, Belgium, Luxembourg, and Germany as the tournament played out. Walking around Namur, Belgium, for instance, on a Tuesday night in early July, seeking out a priced-right-for-a-backpacker dinner, I was left aghast and delighted by the string of cars going by with horns a-blarin’, people hanging out the windows hooting and hollering and waving the Italian flag. The people of one country so unabashedly showing their colors, whooping it up on the streets of another country…what is this International sporting thing, anyway? And then five days later, being fortuitous enough to be in Germany to witness first-hand the crashing out of the Germany team1…I was hooked!

When my pal asked me whether I was going to tune into the 2014 FIFA World Cup my knee-jerk first thought was “Will it be available via the Internet?” to which my second thought instantly responded “Are you kidding? Of course.” Sure, I know the games will be broadcast on television, and I am relatively sure the one we have in the main room still works (The Boy watches it from time to time…I think), but it wasn’t until long after I answered my friend’s oh-so-rhetorical question that I even paid a thought to the idea of actually using the device to watch a match. 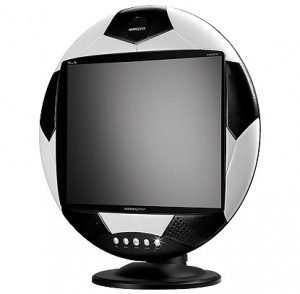 Naturally, the picture the Chez Kessel television delivers is plenty sharp (as so many are these days, we are Triple Play kitted), and something prompted me long ago to wire the sound to come through our stereo speakers (think it was the 2006 FIFA World Cup that prompted that…friggin’ Marco Materazzi, sister-and-mother-insulting classless b*stard), so it isn’t a poor viewing option that had me defaulting to the Internet as my top-of-mind football entertainment resource. It’s just…well…you see…c’mon, you know…it is so much easier to simultaneously Web-out with ⌘+Tab (Alt+Tab for the Windows-fettered readers out there, and whatever-equivalent for UNIX deities and whichever others) than it is via some lap-bound or hand-bound device supplementary to the television.

1994. When to the layman “Internet” meant email and bulletin boards and nothing more. The World Wide Web was just starting to poke its head up, and “streaming” was a word relegated to tape data backups.

Without admitting to anything (and there will be no Q&A), I will cagily say here that a long time has passed since I last watched a television program at the time of broadcast (other, that is, than hypnotized channel-surfing-and-staring borne of jetlag). This is not to say that I am accomplishing the impossible, foregoing television entertainment in what is unquestionably a golden age for the medium (too many programs to list, but suffice it to say that I can speak “The Wire”, “The Sopranos”, “Breaking Bad”, “Mad Men”, and this Millenium’s “Battlestar Galactica” reboot with anyone…buncha great UK-produced programs, too!). I do, though, manage to forego the starchy advertising that comes with all of the good TV meat on offer, and without littering my shelves and floorspace with DVD sets gathering dust.

Yes, packaged up nice-and-digital and stripped of its impurities, television for me has come to mean the Internet. And I find it a richer and far more satisfying experience for that, too.     ==>Twenty-three minutes into the sixth episode of Season Two of “The Americans” a reference is made to an earlier plot point that I skied past. Pause. ⌘+Tab to Google Chrome. Type “The Americans episodes ” into the Address/Search field. A quick click and read. ⌘+Tab back to VLC. Un-Pause. Good to go.<==     Of course, certain television events practically demand in-progress viewing — cannot-turn-away news events and, yes, some sporting events (though "condensed" recordings can now be acquired after the fact, such as three-plus hour American Football games boiled down to 58 minutes!) — but these have not kept that really big monitor in our flat's central room from looking more and more novel with each passing season. 1994. Televisions were definitively three-dimensional, whereas the scripted programming they delivered to the quivering and drooling masses was two-dimensional at its very best. Which inevitably brings me back to "watching the football". I imagine that as was the case the last time around, La Famille Kessel will ease slowly into 2014 FIFA World Cup action, eventually ramping up interest as the meaning of the games increases (and if France makes a move, as in '06, getting downright rabid about it all). And as that happens our somewhat dusty black Samsung-emblazoned flat-panel Living Room window into the Global Village (clichés flowing thick and furious here at the end) will no doubt once again find its purpose.   1Is there anyone who isn’t German that likes to see Germany win at anything? 🙂