Showing your home phone number on your lock screen could avoid a lot of problems if the phone is lost.

I’ve always had “Tref’s phone” as text on the lock screen on my phone. Once when the phone was accidentally left on the bar at the cricket club it was returned to me immediately. V handy.

The other day I was chatting to someone whose kid had somehow left their phone on a bus. Must have fallen out of his pocket. Wasn’t certain it wasn’t stolen but it was certainly gone. They reported the loss at a police station and were able to track that phone but not in sufficient real time to catch up with whoever had whipped it.

At the police station they could see the phone moving alongside the Brayford pool (see yesterday’s pic of swans). They rang the phone but it immediately disappeared off the screen. Clearly it must have been thrown in the water.

Now the moral of this tale is all about the lock screen. Had the kid had his home phone number on the lock screen there is a chance the problem would not have arisen. The “finder” could have rung the home number. Maybe even collected a reward. As it is the phone was permanently lost. A locked phone is no use to anyone. Why steal it?

I can see a scenario or two where this might not work. If a girl had her home phone number on her phone and someone picked it up off the table in a night club for example. The chances are she is probably quite choosy about who she shares that number with.

I’ve changed my lock screen to include my home number. Makes a lorra sense to me.

That could be it for today. Moving kid1 from Oxford to London. That’s Lincoln – Oxford – London – Lincoln. Will have some downtime in Oxford between 4pm and 7pm whilst he finishes a split shift – if anyone is around for a cuppa. Phamily foto below outside his London office. 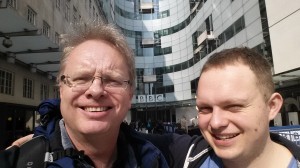