Backup to NAS better than cloud when using slow broadband.

Photos get backed up from my Samsung Galaxy S4 to Google+ and via my Microsoft powered laptop to a separate local NAS box. This doesn’t work for the Samsung Chromebook as the laptop doesn’t recognise the presence of the phone when I plug it in. Also in any one month the photo storage requirement can easily exceed the storage available on the Chromebook – it’s a machine for the cloud.

As it happens when I got my S4 I also got 50GB of Dropbox space free for two years and the photos from the phone have been happily backing up to Dropbox. Why not if it is free? Of course this means that the internet bandwidth I use for backing up the pics has effectively doubled (ish – Google+ doesn’t upload the full size I don’t think).

Last night I downloaded September’s photos from Dropbox to my Chromebook. Dropbox zips the files so it isn’t ideal but it did mean that they were available on the Chromebook for me to drag into the upload box of the NAS box (Netgear ReadyNAS 2TB). Looks as if it has worked though the zipped file on the NAS is only 640MB compared with 1.6GB on Drive so will have to check the contents are all there. I don’t really want to zip the pics anyway. I want them easily accessible. I have plenty of storage space.

This is a bit of a long winded way of backing up locally. There has to be a simpler way of doing it. Also like I said before it also assumes you have enough free storage space on the Chromebook.

I just had to reboot the Chromebook because it totally lost the WiFi hookup and there appeared to be no way of reconnecting it via the settings page.

One of the big drivers for bandwidth usage is offsite back up and storage.

The amount of backup and storage capacity required by a business is to a large extent dependant on the nature of that business. An organisation which regularly processes a large amount of financial transaction or billing data is going to need a lot more than somewhere whose main concern is the safekeeping of CRM data and perhaps the security of information on individual PCs. Moreover as a rule of thumb the larger the amount of data that needs backing up on a daily basis the more critical that data is likely to be for a business.

One of Timico’s customers performs a 50GB daily backup to tape. The tape is removed from the premises every night to an offsite storage location. This is far from ideal. The company until recently operated over a bonded ADSL connection which gave them approximately 2Mbps uplink.

Backing up 50GB over the 2Mb connection was going to take 555 hours. This was not a practical proposition. The company has just put in a 100Mb leased line. The time taken to perform the backup would now be 11 hours which makes an overnight run a real proposition.

Not everyone has a 50GB requirement but as faster broadband technologies come along at cost effective prices more and more people will use an offsite on-net backup facility which will in turn drive bandwidth usage. 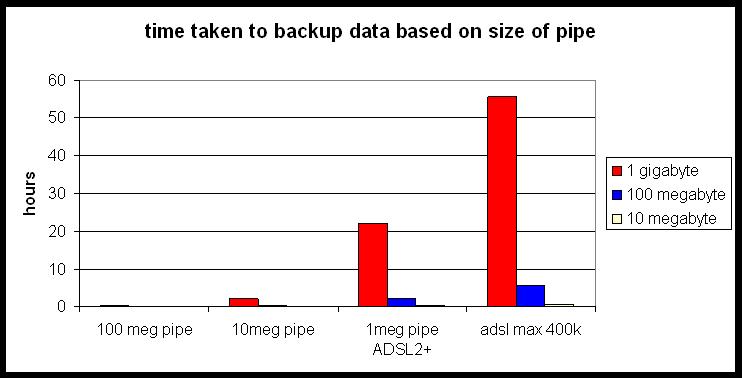 The chart is self explanatory. I’ve made some assumptions regarding packet overhead on the pipes