Friday afternoon finds me well-lunched (New Mexican-ish place that opened nearby about a month ago) and passing roughly 45 minutes at a laundromat that is about 100 steps from the door to our building in Paris’s 18th Arrondissement.

Decidedly not Web 2.0 — no wifi, no URL on the door or windows, no comment field anywhere upon which to register user opinion — the local laverie (that’s French for…well, I trust you can work that out, cherished reader) is actually proving to be somewhat comforting in the mere fact that it has seemingly not changed a lick since my first and only previous visit almost 13 years ago (that being right after My Missus and I moved into our flat at 57 Boulevard Barbes and before the delivery and hookup of our washer and dryer, natch). Of course, the pricing is different now with regard to both the amount and the currency, but everything else is the same or similar enough to register as such…the basic floor plan, types of machines in service, signage, the definitive lack of furniture upon which to wait for the various cycles to complete, the character stereotypes aiding me in occupying the place (and we aren’t talking butcher, baker, or candlestick maker)… 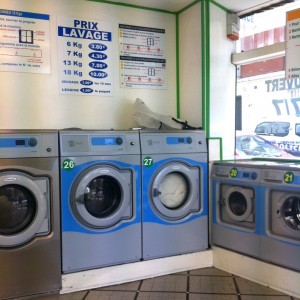 ==> To answer the hanging question for the one person out there who might crave the answer, my lavage moment is brought to you today by frugality and a need to clean a winter duvet that is simply too bulky to launder at home (and which the La Famille Kessel decision-makers are good and sick of paying the teinturier — dry cleaner — upwards of €50 to clean every spring). <==

I must admit that a broad idiot’s smile broke across my face when I realized a few moments ago that this is only my 2nd time in a laundromat in a great many years. The reason for said smile being that before that September 2001 visit to my current perch — with the exception of 1993, a year I spent living in a big house with three other people (and a washer and dryer) — I could always count on spending two hours every couple of weeks passing the time exactly as I am now, reading and writing amongst giant industrial behemoths chewing on my washable wearables and slucking down my hoarded dimes and quarters for the privilege.

In the early 1990s a wave of innovation washed over the public laundering industry in urban America, and before long laundering types had some options. You could have a drink and try your luck at picking up a fellow launderer while your clothes getting sudsed up, or you could bowl a game during the rinse cycle. Of course, the good old-fashioned laundromats that I tended to inhabit soldiered on — those offering a rundown pinball game or an ancient Pac-Man machine for entertainment…if that — but now instead of the dull sense of tedious contentment with which we old-fashioned launderers were familiar, we were instead subject to a new and strange sense of unease, knowing that somewhere out there on that mundane Laundry Night there were those who were dancing or enjoying karaoke while their unmentionables were tumbling.

Did I bite, you are no doubt wondering? Did I turn my back on the underprivileged and overworked, the single old-timers, the vagabonds and homeless folks with enough esteem to occasionally freshen and soften their garments, the students squeaking by on budgets too small to be seen with the naked eye? I did not! But then, none of the new-age laundromats were offering free Internet access.

Nearly a decade and a half of years pass. Have passed. Past. A quick google-bing today reveals that clean-your-clothes multi-tasking has continued to expand and evolve, with Laundromat-Cafés (yes, offering free wifi) and even Laundromat-Restaurants now heavy in the mix. All we need now is Laundromat-equipped office cubicle farms and the evolution of the public laundry arts will be complete.

Duvet spinning fast now. Yes, I do think there is a song in there somewhere, but it is just past the reach of my tongue at the moment. Two minutes to go and I am outtahere.

One reply on “Owed to the Laundromat”

In my own pre-own-washing machine days I used to use the service wash. Just dropped off hte laundry and it would be washed, dried and folded which to a bachelor was the same as having it ironed.