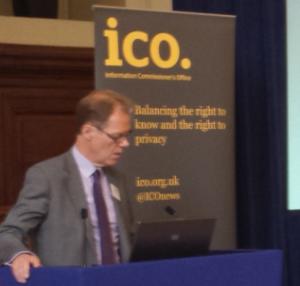 The Information Commissioners Office has 355 staff. Hadn’t realised it was such a big outfit. When you think about it with the world moving online and with so much information about us being kept in so many places the ICO has a huge brief. Also the ICO website has been changed from .gov to .org to emphasise its independence.

I know this because I’ve just come from the ICO’s Annual Review at Central Hall in Westminster. Being on the ICO’s Tech Reference Panel and all that!

A lot of meeting was just the presentation of statistics. Did you know that over the past year more than 225,000 people called the ICO’s helpline? Well you do now. There are some big growth areas such as SPAM calls and texts. It’s good to see that the ICO is starting to bare its teeth when it comes to this kind of stuff. We have seen the first two lots of fines (called civil monetary penalties for some reason) to the value of £225k imposed on pest cold callers. These people are just the lowest of the low.

I’ve started to report incidents of spam calls to my own phone – coincidentally got one this morning from 08432890049. I have duly reported it here. If all of us report it every time we get a spam call or text we can at least contribute towards nailing the ones in the UK. The overseas call centres are unfortunately beyond the reach of the ICO. I’ve just started to get rude with them.

You can look at the report yourself here. In line with the ICO’s new green policy the only hard copies available are the ones required to be kept by Parliament. Now there’s a very telling message in itself.

I will leave you with a fact that was related by Commissioner Christopher Graham. The ICO is currently looking at online privacy Ts & Cs. I got the impression that they are looking to try and come up with recommendations for a set of rules that would provide adequate privacy protection for people signing up for new products and services online and who just tick a box to accept conditions imposed. Did you know that if you added up every set of T’s and C’s you accept in this way it would take 77 days if you had to actually read it all? Well now you do 🙂

At last week’s ITSPA Council meeting we discussed nuisance calls. This post on on the subject was written by Pete Farmer, writing in a personal capacity. Pete is the Commercial and Regulatory Manager for Gamma  a wholesale supplier of telecoms services. Pete is a colleague on the ITSPA Council  and chairs their Regulatory Committee. His contact details can be found via his LinkedIn profile.

No-one doubts for a second that silent or abandoned calls – the current focus of Ofcom’s attentions whereby predictive diallers make more calls than they have agents for- are a pain. It is even worse for a vulnerable person to receive a prank call at 3am let alone one where the content is potentially violent or sexual. These are often criminal acts that require decisive action from law enforcement.

What people don’t talk about so much though, is the effect such calls have on businesses. The economic harm as well as the effect on the staff can be commensurate with that suffered in a residential setting.

A business can of course be pseudo-domestic; by which I mean that a plumber, electrician or window cleaner procures their telephony services much as they would at home