You may have been following my attempts to back up my photos from my Samsung Galaxy S4 Android to my NAS box. This has become an issue since starting to play with the Samsung Chromebook which doesn’t recognise the phone when it’s plugged in via USB.

I tried a few methods including downloading from the Dropbox folder to the Chromebook and then dragging the folder into the relevant share on the NAS. This is very inelegant and you end up with a zipped file.

The answer was an app. I tried a number of them including Netgear’s own ReadyNAS Remote which doesn’t generally get good reviews. I got ReadyNAS Remote one to work but found that I could only upload single files manually which wasn’t going to be good enough. No response from the ReadyNAS forum on that one either. I also tried Airdroid with no success.

I got excited with “Upload 2 NAS Lite” last night when it appeared to be successfully uploading the files. However it was very slow and I left it running overnight. This morning the app told me it had finished but there were no files to be found on the NAS box. Looking at the forum for this app I can see others having the same problem with no apparent resolution. Using Upload 2 NAS Lite looked as if it was going to be a complicated job so I looked elsewhere.

Lying in bed this morning I then came across “Sweet Home“. This one worked like a dream and did the job far more quickly than Upload 2 NAS Lite. The User Interface was also by far the easiest to use. I am a happy chap. I am actually going to buy the pro version it is that good. Very easy to use.

The only thing left to nail is the fact that I usually backup to both the ReadyNAS and a separate 2TB palm drive that I keep in my desk. I’ll have to see if the Chromebook can see that drive and then look at backing up from the NAS box. The alternative is to have two separate NAS boxes which is somewhat industrial strength and over the top for my personal needs or to run with only using Google+ and the NAS.

The picture of the phone is on the right. Looks dead doesn’t it. That’s because it’s switched off. It isn’t totally kaput yet but it was about to become so. I plugged in the charger but didn’t plug in the charger. It wouldn’t fit in the socket.  I tried three different cables. None of them would go. I tried them in another phone and they all fitted in as designed. Ergo something is wrong with the socket on the SGS4. The highly efficient gang in the Timico logistics department has taken control and are sending it back. I had to switch it off to conserve battery settings before making sure it was fully backed up (it now is) and reset to factory settings so my precious personal data was not accessible to whoever is going to fix it.

Ok I know what you’re saying. S*&t happens. You are right. However it seems to happen on a disappointingly regular basis with the Samsung Galaxy phones. The last one I had, a Galaxy S3 had a problem with the USB socket and separately with the headphone socket. Data transfer was dodgy and the actual charging was very intermittent, It was clearly about to go. I got it fixed. Before then I had a screen go dead on me and “water ingress” problems despite the fact that I know darn well there hadn’t been any water ingress.

I am a Samsung Galaxy fan but I have no hesitation in saying that the build quality on the Samsungs must stink. You’re not telling me I can have had all these problems and I’m the only one. In fact I know I’m not. Having written blog posts about each problem as it happen the “Samsung Galaxy S3 problem” search term in one guise or another has become one of the most popular reasons for people reaching this site. In fact there have been around 51,000 page views on the subject in the last 6 months.

In the meantime this morning I have reverted to my Nokia Lumia 920. It’s functionality is some way behind that of Samsung/Android and even, dare I say it Apple despite not being an Apple fan for unzombie-like reasons (good word structure there). What we need is the Android software running on Nokia build quality. I do accept that I haven’t been running the Nokia much but I did give it a chance for at least a month and in that time it didn’t stop charging, the headphone socket carried on working, oh and it didn’t have a dent in the casing which the SGS4 did after a few days despite, and you have to take my word for it here, me not banging it about or dropping it.

The Samsung build quality is not great. That’s all. Got it off my chest. tune in later for more mobile phone fun and frolics (though I have to get on and revise a guide to migrating to SIP trunks now so it will be a while)

PS to make it easy for those who are interested I’ve pasted links to all the other posts that talk about Samsung Galaxy S2 and S3 problems:

I quite like the title “A postcard from Timico”. It suggests destination, travel, communications even which is quite appropriate in our case. The reality is often different. It could be a reminder to book your dental appointment! Yuk.

On this occasion it is merely a  clever ruse to entice you to read this blog post which in actual fact is simply about the Samsung Galaxy S4 and the fact that it has a really cool feature that allows you to take photos using both cameras simultaneously (at the same time).

The simple things in life eh? Postcard below shows my face on a stamp – it’s the only way it’s going to happen:) The beautiful view is across the car park to the ball bearing factory (or some similar industrial manufacturing plant) and beyond to the rooftops of our fair town of Newark. 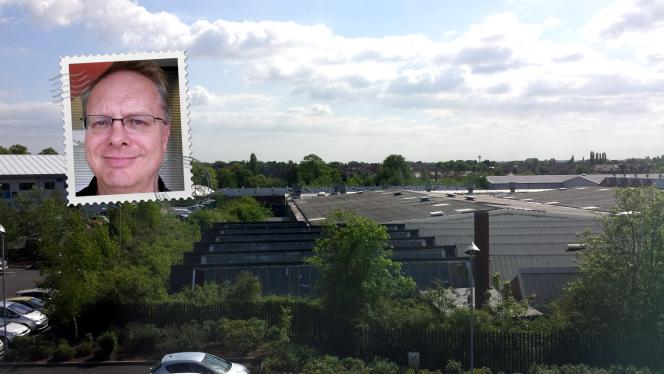