Took me an hour and ten minutes to get in to work this morning. That’s twice as long as usual – broken down tanker on the A46. Walking in to the office I felt a bit like the Reggie Perrin of old – “20 minutes late, frozen points at Clapham Junction”.

I went on a very long diversion through the Lincolnshire and Nottinghamshire countryside. The stark winter beauty reminded me of the Thomas Hardy poem “The Darkling Thush” :

I leant upon a coppice gate
When Frost was spectre-gray,
And Winter’s dregs made desolate
The weakening eye of day.

It’s one of my all time favourites.  Anyway driving in on this extended albeit pleasant detour made me think about the whole subject of commuting and broadband for working from home. The number of times I have the radio on driving home on a Friday night to hear the UK wide traffic reports – quite often its gridlock on all the major routes around the country.

Makes you wonder how much time and money we really waste travelling to work. Granted there are some jobs where the person absolutely needs to be in the office but equally there are many where a little bit of mix and match (home versus office) would be perfectly acceptable. Phone system vendors often try to model the financial benefits of homeworking as part of their pitch to customers. I don’t think you really need to work out the payback in terms of pounds shillings and pence. It’s bloomin’ obvious.

Quite a number of our customers see this. We have a portal that some of them use to manage estates of hundreds, if not thousands of home worker broadband connections. The portal is integrated with the customer’s HR system and when an employee moves house and change their address the portal automatically informs us to migrate their broadband to another location. For some large organisations this can save a considerable workload on the IT department – managing what is really a tedious and time consuming process that really benefits from automation. Bung in a VoIP account and hey presto, you have a home office just like in the office.

To conclude, my other favourite Thomas Hardy work is “Under The Greenwood Tree”. I don’t get on with most of his novels, they are depressing, but this one  is a nice novel and signals the end of an era in a similar way to the Darkling Thrush. It is also very seasonal and I am now most definitely feeling Christmassy.

Just had a communication through from BT re planning for the Olympics. This year the good citizens of the United Kingdom are divided into two camps – those that are looking forward to the Olympics, think it is a great thing and are really excited, and those who think it is a huge waste of money that would be better spent on hospitals and schools and have been whinging about it ever since it was announced.

I am excited. What’s more I have tickets for me and the kids to see the kayaking slalom finals aaaand we have some great friends in Windsor who have kindly agreed to put up the whole noisy lot of us (and before anyone chips in we aren’t kipping at Windsor castle – they already had too many people staying). That for those of you who know the Davies’ (6 of us) is a big ask.

I’ve already posted about the expected growth in traffic on ISP networks during the Olympics. Interesting research just in is a look at the lessons learnt from the Vancouver Olympics.

END_OF_DOCUMENT_TOKEN_TO_BE_REPLACED

You are looking at a disappointed man. Wha!  How can this be?  Surely not you Tref I hear you say? Yes yes disappointed 😉 What’s up?  We have had a very light smattering of snow.

I like snow. Snow, for the most part, makes the place look pretty and means I can wrap up cosily in front of a roaring open fire at home and enjoy the real winter. I don’t do the sledging any more – it’s all very well getting a thrill from speeding down that hill but you then have to traipse all the way back to the top dragging a sledge and almost certainly a kid. I still like throwing snowballs mind you. Nothing quite like the satisfaction of catching someone in the back of the neck.

I also quite like the superiority of owning a 4×4 when it snows. Other cars are sliding all over the place or struggling to get up the slightest incline but the Jeep takes it all with total ease.

This snow is not heavy enough for any of any of that. It might well close the golf course tomorrow but that is largely because you can’t see white balls on a white background. That’s the only thing this snow is likely to disrupt this weekend and in all probability I’ll be watching the 6 Nations rugby so not playing golf anyway.

None of the above is why I’m disappointed.

END_OF_DOCUMENT_TOKEN_TO_BE_REPLACED

Had a day working from home today.  Nothing to do with the snow actually but my car is in being fixed after failing its MOT. Nothing major so don’t worry – just time consuming 🙂 .

I had a hugely productive day. Interestingly, whilst I spent much of the time on the phone, of the 26 calls my log tells me I made half of them were to people not in their office but working from home because of the snow. Only a few calls were made that actually cost any money, those to suppliers.

Most people I spoke with would not have known that I was at home were it not for the conversations on the subject of the weather, a peculiarly British phenomenon I think.

What is also interesting is how the house rules work. I long since lost the use of my study to the dreaded TV. I thought I could control it! Because of this if I’m working from home, which is actually only occasionally because I like being in the office,  I work in the kitchen or the conservatory. Both have Cat5 cabling for the VoIP phone.

Today the whole family was off school (my wife is a teacher) and celebrating but it meant that working in the kitchen didn’t make sense due to the human traffic. Also the conservatory was not the warmest place in the house. So I ended up working in the living room in front of the log fire – the living room also has Cat5 – doesn’t everyone’s.

The living room therefore became the no go area that was exclusively mine and everyone obeyed the rules. My pointreally is that the issue concerning homeworking is no longer whether you can do a proper days job. VoIP and broadband now makes this easy, at least when working for Timico. The issues now relate to whether you have a suitable working environment at home that allows you to be productive. Not everyone has suitable space.

I thought I’d share this picture with you – the open fire in the living room. Very pleasant when it is snowing outside – even though it was the MOT that kept me at home. By the way the kitchen also has a number of Cat5 points – doesn’t everyone’s? 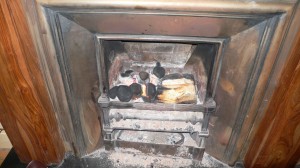